Ever had your car towed away unexpectedly? How about being removed from your car by someone implying themselves to be a law enforcement official? I’d like to introduce you to the New York City Marshal program, and particularly to one City Marshal, Linda Swift.

On Tuesday evening I was sitting in my parked car, waiting to pick up a friend at an event that was ending at a building in midtown Manhattan. A large man knocked on my window, asked me to roll it down, and when I fumbled trying to turn on the car so I could do that took it upon himself to open my car door. At that point, two other large men arrived at the side of my vehicle escorting a woman wearing a badge around her neck detective-style, who identified herself as “New York City Marshal Linda Swift”, demanding that I get out of my car.

I’ll bet you’ve never heard of a “New York City Marshal”. Neither had I. But between the show of force and the badge, I was stunned long enough to do as I was told—which of course is what Marshal Swift was counting on.

Marshal Swift and her posse asked that I walk toward their large, dark, menacing van, from which she produced a court order authorizing her to seize my vehicle as collateral for outstanding parking tickets: 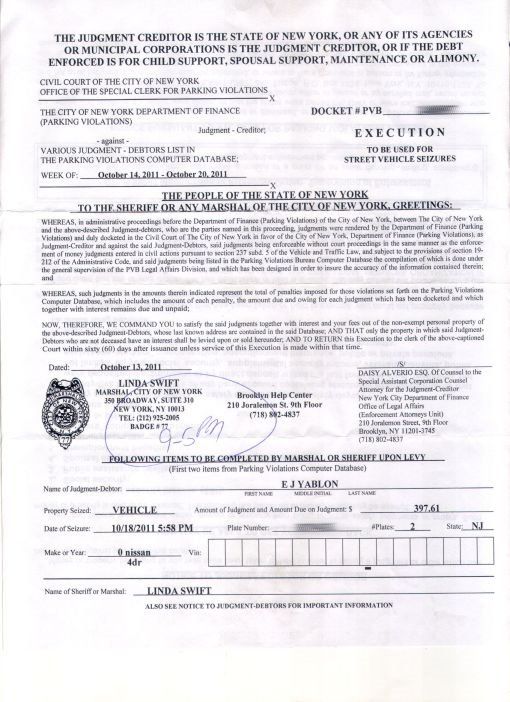 There are enough errors in the way that Order is constructed that any first-year law student could get it thrown out of court. Nevertheless, by the time Marshal Swift had finished explaining to me that I needed to call her office in the morning to get instructions to pay the $596 I owed to retrieve my car (the amount on the order plus fees), my car had vanished. And possession, as the old cliché goes, is 90% of the law. I believe that Ms. Swift confiscated my car improperly and that I could prove so in court, but that isn’t material; I needed to get my car back.

As a business person and advocate of and consultant on business change, I have no problem whatsoever with the City of New York or anyone else finding inventive ways to do business. That includes collecting debts, and although I fought the older of these two tickets on procedural grounds and believe I was in the right, the city of New York believes otherwise and has put a system in place to boost their collection efforts. I applaud this. This is the kind of thing that businesses must do to succeed.

But Mayor Bloomberg, please understand that the New York City Marshals program, regardless of its financial success, is essentially a form of legalized extortion.

Ms. Swift didn’t state but absolutely implied by her actions that she was a New York City employee and a peace officer. She is neither. Marshal Swift, in the course of distracting me long enough to have my car towed before I had a chance to argue, also stated fact improperly and incompletely when she told me that I could get my car back from her for $596 and failed to reveal she was able to take payment on the spot. By the next morning that number had risen to $724, and the employee with whom I dealt at Marshal Swift’s office as much as told me that I had incurred those extra fees by following Ms. Swift’s instructions to call her office in the morning. Why would Marshall Swift mislead me in that way? Because it created extra revenue for her.

And again, Marshal Swift found my vehicle parked with me in it, presumably by doing a random scan of license plates. And the details she filled in on the Court Order she then printed and under which used to seize my car are both incomplete and inaccurate.

Further, Marshal Swift never even ascertained my identification, which is very likely a due process violation, but I still needed to deal with her pile-on-one-fee-after-another-because-she-says-so office in order to retrieve my vehicle and THEN show multiple pieces of ID to get the car back.

Oh: and to suck some extra fees out of and further inconvenience people they practice this legalized extortion on, Marshal Swift’s office accepts MasterCard, American Express, and Discover credit cards, but not Visa or any kind of debit cards. And if you do use a credit card Marshal Swift hits you with yet another fee to do so, which is a violation of most credit card merchant agreements.

As I said: I don’t believe Marshal Swift broke any laws. And I applaud the City of New York for their ruthless and thorough methods of collecting what they believe to be valid outstanding debts. I even applaud Marshal Linda Swift for skating oh-so-close to the line of impersonating a police officer without actually stepping over that line.

But the New York City Marshal program is operating in a manner that my “legalized extortion” description truly fits. And Mayor Bloomberg, you appoint those Marshals. By failing to more carefully monitor the rules under which the Marshals act you’re making the City of New York and yourself look bad.

Business Change in an era of open communication requires a higher standard of practices than that. I’ve told you that there comes a time when you almost have to succumb to changes like Facebook, The Timeline Version, but this is more important than the silliness of Facebook. And it’s certainly a more important example of legalized extortion than what’s been suggested happens at Yelp.

I wonder how long it will take for a retaliatory tow now that I’ve written this in public?