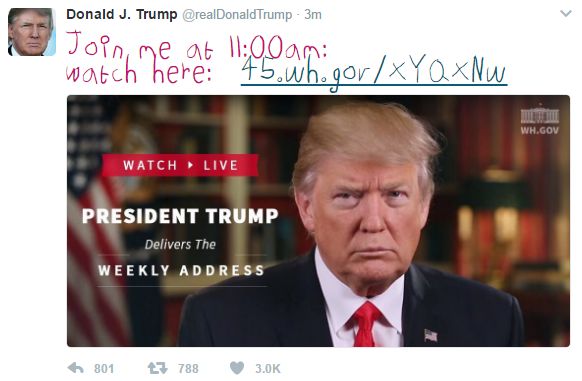 We have something new to look at today. LIVE! IT’S THE TRUMP WEEKLY ADDRESS!

If you blinked, you missed it. The first Trump Weekly Address, announced by Mr. Trump himself less than an hour before it took place, went on for under four minutes. It ran on Facebook Live and had a total audience of approximately twenty-two thousand viewers. Mr. Trump said pretty much nothing. I mean that literally and not as a dig at Donald Trump; The Trump Weekly Address was too short to include much of substance.

I’ve been rough on Donald Trump. You have to admit the guy understands what happens when the masses consume media, though. And The Trump Weekly Address, delivered as it was in a Facebook Live video session and having so little substance, was clearly meant “for the masses”.

My first thought was that using Facebook Live for the Trump Weekly Address instead of streaming from a place accessible to anyone was a mistake, but given how large an audience Facebook delivers and that Mr. Trump’s base is entirely likely to be Facebook-ified, I’ll back off on that. And as I said, the dude understands mass media, so announcing the address less than an hour before it took place may not be a problem either.

Ditto the length. The Trump Weekly Address was exactly the bite-sized nugget of nothing that Trump fans thrive on.

But after the debacle that was yesterday’s seventy-six minute Trump Press Conference, I’ve found myself thinking back to “The Right Way and The Wrong Way”, especially as it applies to Donald Trump. And I’ll repeat my admission that Trump understands media.

The Value in The Trump Weekly Address

I have a long-held belief that 95% of businesses do 95% of the same things 95% of the time. Viewed as a business, the Presidency of The United States falls into that small leftover slice. Carry that to Trumpian specifics and you get to this reality: What Donald Trump doesn’t understand is that his vast knowledge of the real estate business doesn’t translate to other businesses very well.

So sure, that “Facebook Live may be the perfect vehicle for the Trump Weekly Address” idea has merit, but … it’s still wrong. Not everyone uses Facebook. Not everyone has access to it during business hours. And unless his goal for the Trump Weekly Address is to <ahem> quietly reach his base and nobody else, it’s a terrible waste of his platform as POTUS.

What would you do with a platform like the American Presidency? Want to talk about it?