Does SEO Matter? Yes. Why? Because Google Can’t Count.

I was excited when Google announced the new real-time feature in Google Analytics. My excitement lasted only a few seconds. Once I was granted access to the new version of Google’s traffic-counting software, that’s how long it took to see that Google Analytics, although more useful with each added feature and traffic measurement metric, is less “accurate” every day.

The subject of Google Analytics’ accuracy stretches back for quite a few years. Any webmaster can tell you that there are many ways to measure traffic, and that Google Analytics is just one tool with one opinion. The meaning of “traffic” differs from one measurement service to another, and definitions of traffic components differ, too. Just try and get a consensus on what “bounce rate” means, and then try to get consensus on when bounce rate matters.

To measure the performance of your web site, you need to track a lot of things. It’s all the more important for companies that have invested in search engine optimization, of course, but whether you do SEO or SEM, for yourself or with the help of a company like this one, you probably want to know how many visitors come to your web site, where they come from, etc.

Taking that a step further you get real-time analytics. Who’s on your web site RIGHT NOW? Last week I asked Google through the new abilities in Google Analytics, and simultaneously asked Woopra, one of many traffic measurement services that you can pay for. Here’s what I got: 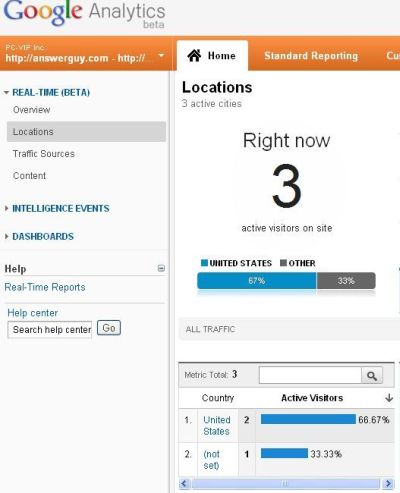 The data was from exactly the same moment. And while I’m showing you just part of the Real Time Search Analytics information I received from each of the services, you can see that Google and Woopra both saw the same three visitors at the moment I asked. Woopra showed me exactly where they three visitors came from (Google doesn’t go quite that far). But Woopra was able to place all three visitors, while Google didn’t know where that European visitor to Answer Guy Central had come from, and … said so.

I’m not picking on Google for having incomplete information. Or maybe I am; after all, they’re Google! But I am making a point about the nature of analytics, be they from Google, Woopra, or somewhere else.

Analytics aren’t much good unless you know what you’re looking for, and how to find it.

Google Analytics is free—sort of—while Woopra isn’t once you pass a traffic threshold. I call Google Analytics sort of free because Google has started selling an enhanced version of the tool. And you know what? It’s probably the right tool for you invest in, or will be once it matures—again, because it’s from Google. But can you trust it?

Early last year, I suggested that Google Analytics had become worthless because you can opt out of it; some visitors just don’t get counted by Google Analytics. It gets worse. Google is now masking some results, from some users, for some trackers of this information, on purpose. Is all of that aimed, over a very long product marketing cycle, at forcing you to buy the paid version of Google Analytics? Umm … yeah, it probably is.

Regardless, all any of this points at is the absolute importance of Search Engine Optimization, and doing it according to an SEO Philosophy that makes sense, so you can track its success.

Or just wait around. Eventually, Google will make all of this easy, and transparent. Right?