Social Networking, But No Social Graces 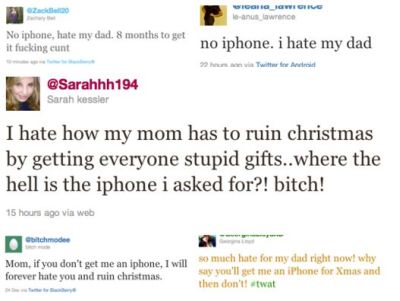 If I hadn’t seen it myself, twice, I wouldn’t believe it.

In both the example above (courtesy of my son Mike’s Tumblr) and this example at Gizmodo, social media/social networking (via Twitter) show just how ugly it can be.

Facebook, you aren’t off the hook, but Twitter does seem to be a more rife grounds for this kind of thing.

SERIOUSLY? Tweeting about your displeasure with the Christmas gifts you received? And not just general “I wish I got better stuff for Christmas”—which would be no more or less self-indulgent than “Bob just ate a taco!”, but “my dad is a jerk because he didn’t get me the iPhone I asked for“.

Miss Sarah Kessler, you didn’t deserve a iPhone. Or anything else, for that matter.

I don’t want this to be too much about Sarah Kessler, although she deserves to be held up as an example of what’s going wrong among our young people. I don’t even want to make this about young people (although I maintain that older people are smarter than younger ones). No, this is about something I’ve mentioned before:

Yeah, I Hate Texting. Sure, there are any number of anecdotal instances when I’ve railed against how disconnected we can get using these supposed “advances”. But for goodness sake, can’t we agree that there are simply lines that we should all be smart enough and human enough not to cross?

Don’t Swear in Writing Unless The Swearing is Meaningful to The Story You’re Telling. Stay engaged with the people you’re communicating with, for real; especially if your expertise is supposed to be communication. Keep your negative opinions off Facebook, especially if they’re about your employer.

And … Holy Cow … remember that Perception Really Is Reality.

You didn’t get the gift you wanted for Christmas? Waaaaaaaaah.