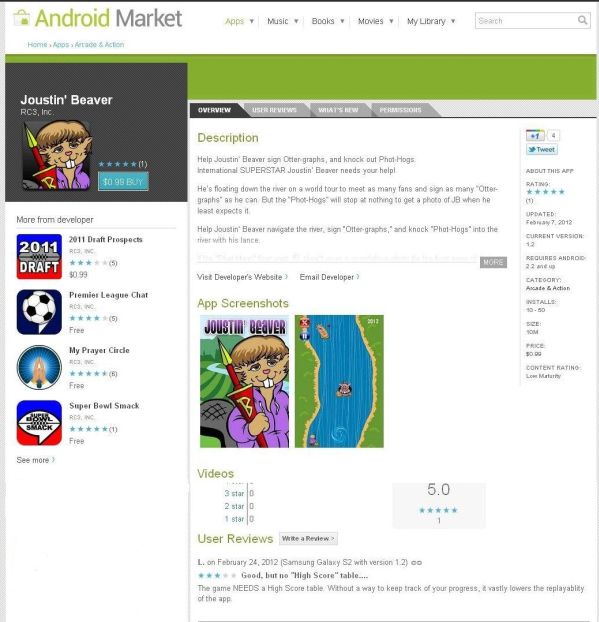 Do you know the difference between Justin Bieber and Joustin Beaver? Justin Bieber’s attorneys are afraid you won’t be able to. Can you say “cease and desist”?

Bieber’s attorneys have said exactly that to Joustin’ Beaver’s developers. The Joustin Beaver App, current available here in the iTunes store and here in the Android Market, may not be long for this world, so download the Beaver before the Bieber stops you.

Trademarks and copyrights are a subject I discuss here from time to time:

Even Linsanity has become a disputed trademark.

And the Justin Bieber/Joustin’ Beaver story has my head spinning. Kudos to this FOX TV affiliate for talking it up before anyone, just one day after Joustin’ Beaver was released:

It’s a tricky topic in the Justin vs. Joustin’ story. Bieber’s attorneys are relying on the idea that if you do something that seems as though you are the trademarked item/person or that might reasonably cause confusion, then you’ve violated trademark law—even if you’re just joustin’ around.

I’d like my opinion to fall on the side of the Joustin’ Beaver team, but I’m having a hard time with that. No, I don’t believe that anyone will mistake Joustin’ Beaver for Justin Bieber, and I also don’t think the business people in the Bieber camp have enough of a sense of humour to have come up with Joustin’ Beaver on their own. And it’s easy to call the similarities between Joustin’ and Justin “parody”, which is protected speech.

On the other hand, unlike parody by a comedian, which ultimately (may) make money, the Joustin’ Beaver App is designed to make money, and designed in such a way that it’s pretty easy to argue that the App would have had no chance if it was exactly the same but without the obvious “piggyback on Justin Bieber” hook.

And the numbers would seem to bear that out: Look at the screen grab I’ve included from The Android Market. As of this morning Joustin’ Beaver had been downloaded fewer than fifty times; viewed purely as a game, it hasn’t gained any traction.