In their continuing effort to stave off irrelevancy, Microsoft keeps branching into new businesses. The beast from Redmond will never again see the same kind of dominance they enjoyed with Windows and Office, but lately they’re making some pretty good moves.

No, Bing won’t be overtaking Google. That whole battery thing is neat, but not a behemoth of Microsoftian proportions. And yes, XBox is huge, but again, a niche.

Last October, Microsoft bought Skype. I’ve been using Skype to make the occasional video call for a lot of years, and even to call landlines once or twice, but Skype was never a big deal, business-wise, and I’m pretty sure continued to lose money right up until it was acquired by Microsoft.

The Skype acquisition is clearly not just about competing with Apple’s Facetime for ad-hoc video calls.

Last Week, I received an e-mail from Skype. And I’m glad I did, because I really like this band Scarlet Grey that Skype used in the experiment they were touting: 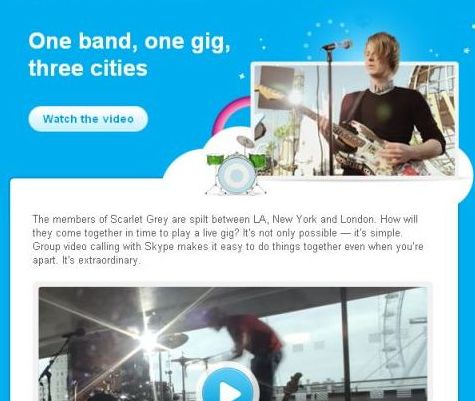 Whether they Brand it as Say It With Skype or Group Video Calling, what Microsoft showed off with Scarlet Grey’s help was impressive; these guys played a concert with their members in three locations. Assuming there was no sleight-of-hand and the Scarlet Grey members in London, New York, and Los Angeles were tied together over the public Internet and not a series of special pipes cobbled together for the event, this is impressive stuff.

It had better be. Microsoft paid $8.5 billion for Skype, and unless they can get a lot of people to pony up the $5 per month they want for Group Video Calling it’s going to be a very long time before they get that investment back.

Say it With Skype is the kind of application that could finally make video calls something more than just a curiosity. Cisco missed the boat with ūmi. One-on-one ad-hoc video calls feel clumsy even after so many of us have made them for so many years. And you know how I feel about most people producing video for most web sites.

But pre-arranged multi-site video that actually works in real time as it needed to for this Scarlet Grey concert to come off? That’s a lot of money to be saved on travel, don’t you think?