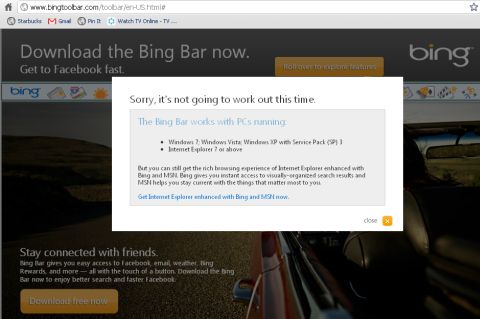 Closed systems are a very bad idea. Hey, Microsoft: as you slide closer and closer to irrelevancy, keep that in mind.

This article pointed me at Bing Rewards. And just as I felt a little sheepish for never having written about Kickstarter before yesterday’s piece on Rabbit Troupe, I’m embarrassed to admit that I didn’t realize Microsoft had created Bing Rewards until I read that yesterday. How did I miss this business change?

I talk all the time about Bing’s irrelevancy in the search market, ever keeping a wary eye on their share of search. I speak from the position of a guy who has to know about these things in order to deliver great search engine optimization for our clients, ever fearful that if Bing—or anyone else—manages to take a significant enough piece of Google’s pie that I’ll have business change and business process problems of my own to contend with. And Bing Rewards is just the kind of weapon that could vault Bing into more serious competition with Google in the search market, except Microsoft has missed something:

One of the ways Bing Rewards is delivered is through the Bing Toolbar. Bing Toolbar isn’t the the only way to participate in Bing Rewards, but Microsoft throws the tool out there as one more part of their plan to snare users by as many avenues as possible. It’s a good plan.

But Google had a toolbar and shut it down. Google no longer needed what their toolbar was bringing them (more users, more search engine optimization data), so there’s a difference here and if Microsoft can get you to install a toolbar in your browser they should do exactly that. The problem is, Microsoft has decided that the only people who they want using the Bing Toolbar are people who also us Internet Explorer and run Windows.

I appreciate that developing the Bing Toolbar for other browsers and other operating systems costs money. But it’s not like Microsoft is operating on a shoestring budget. Remember, Microsoft is a company that now develops new kinds of batteries, and you have to believe that if they can afford Research and Development on that level they can afford a few extra dollars to extract the real value from a piece of software that’s core to their long-term goals and that they’ve already created.

Failing to get this kind of business change right could be enough to grant Google their wish that Microsoft go away.

Customer loyalty programs only work when you extract the most data possible and know how to use it. It’s what drives supermarket loyalty cards, for example, and in the uphill fight they face against Google, Microsoft needs to understand the absolute need to grab hold of everybody, everywhere, through any means possible. No Apple Macintosh users? No users of anyone else’s browsers?

People LIKE programs like Bing Rewards. They’ll participate in them. And there’s certainly enough concern building about the way Google does business to help push people toward Bing—which in its way is a better search engine, anyway. But to then put up barriers? Ridiculous.

If you need help with your business change, I’m right here. And if you’re Steve Ballmer and reading this . . . well Steve, I’m here for you, too.