Yesterday, Microsoft created a joint venture with Barnes & Noble. The new company, named—I’m not kidding—NewCo, will own and operate Nook, the eReader that Barnes and Noble sells to compete with Amazon’s Kindle (there are others, but frankly the eReader wars are already over; Nook and Kindle are the only two combatants that matter).

The fact that Microsoft bought their way into the eReader market isn’t much of a surprise. Microsoft’s been branching out from their declining Windows-and-Office business for a while now, and spending some of their considerable cash hoard getting into alternate markets is a great move. Maybe Microsoft can stave off irrelevancy, after all. Batteries? eReaders? Why not?

The question is why Microsoft paid so much for so little of Barnes & Noble’s Nook eReader business. 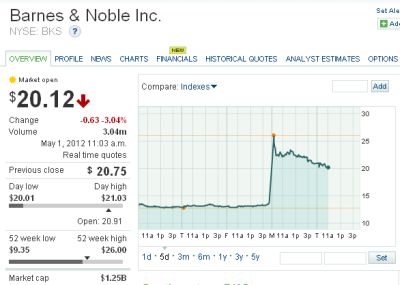 Sure, the latest Nook is the best e-Reader yet. But Microsoft paid $300 Million for a 17.6% share of the NewCo partnership with Barnes and Noble. Before the deal was announced and Barnes & Noble’s stock spiked from under $15 to over $25, the total value of Barnes and Noble was about $800 million.

Microsoft paid $300 million for just over one-sixth of a PART of something worth a TOTAL of $800 million?

As our main topic at Answer Guy Central is business change, I guess I should step back and ask what circumstances existed that made that math look smart. And if I’m right about Nook’s place in the ecosystem of eBooks and eReaders, maybe Microsoft was smart to ignore Barnes & Noble’s stock valuation and instead value Nook at a high premium. After all, this is no “One Billion Dollars for Instagram” deal. And Microsoft is a mature company run by mature people; I can’t go on a rant about young people not being as smart as older people.

And sure, smaller chunks of technology and marketing ideas are becoming more valuable. Maybe Nook is like a great App. It’s Cool! Buy It! It’ll Pay Off!

But Microsoft still paid too much for their piece of the Barnes and Noble/Nook partnership. And here’s why:

Barnes & Noble is a publicly traded corporation. All Microsoft had to do was buy the whole company at a premium above the now-inflated price Barnes and Noble was trading at before the announcement of their investment in Nook, and they could have owned the whole thing.

Now sure, Microsoft probably doesn’t want to be in the bookstore business, and Barnes and Noble has announced that their Nook eBook business has already become larger than their money-losing brick-and-mortar operation. But so what? Microsoft could have paid $1.5 billion to buy the entirety of Barnes & Noble and sold or shut down the parts they weren’t interested in. Has no-one at Microsoft seen Wall Street?

Microsoft did a very smart thing grabbing a piece of Newco/Nook. And I’m OK with overpaying against a stock valuation that was probably too low. But paying this price just wasn’t necessary. If you’re a Microsoft shareholder you have something to complain about.

Looking for help planning your next acquisition or other business change? I’m right here.