Livefyre? Bad Idea. But Not For Why You Might Think … 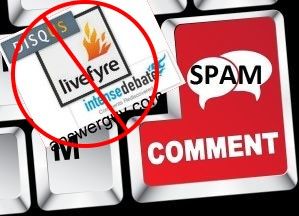 When you’re The Answer Guy, you need to have answers ready for tough questions. And for the time being, my answer to “is Livefyre a good idea?” is, sadly, an emphatic no.

This makes me sad, but probably not for the reason you’re thinking. Livefyre does what it’s supposed to do and we could see that from the moment we installed it yesterday. But technologically speaking, Livefyre is a bit of a mess. And while it tries to make good on its promises, like letting you keep all your Search Engine Optimization juice, Livefyre creates other influency-sapping issues.

The moment we flipped Livefyre on, we saw a problem: the Livefyre comment box was displaying twice on each page! This isn’t Livefyre’s fault; the issue here was in the tricks undertaken by our Headway-driven theme here, and as I told you a few months ago, Headway is amazingly powerful, but creates some issues.

And there’s some great news about Livefyre. At Livefyre, they have the customer service thing down, cold. I asked for help with that double-display thing, received a detailed answer about that and a few other questions in under an hour, and then, another Livefyre employee jumped in when Livefyre noticed we had written about them. Truly; the Customer Service side of Livefyre is on its game.

Livefyre assigned yet another employee to try and fix the double-display issue and he did what he could to help out until both he and I were convinced that Headway was to blame for the problem. But again, he went much further. I noticed that Livefyre was also doing some things with the storage and display of comments that weren’t OK, and that it was causing the database that drives Answer Guy Central to swell in size, and he jumped into those issues, as well.

He failed to fix them, by the way, and that’s why Livefyre is gone. But from a customer service standpoint? I’ll say it again, as has one commenter here: Livefyre is a great company.

Now, I’m going to get a little geeky. Read along if you want to understand the issues that surround software like Livefyre.

As I told you yesterday, one of the things that concerns me about Livefyre and other comment management tools is that when you use them you give up part of your Optimization juice; Livefyre, Disqus, IntenseDebate, and services like them, draw traffic away from you and to them. This is a problem for you both because—well, I don’t even need to explain the obvious part, right?—and because when your content gets replicated and hosted on someone else’s web site Google thinks more of them and less of you. When that site is the size of Livefyre, the scales tip even further away from you. This is just one of many reasons that we recommend against using Hubspot, by the way.

But that leaves what happens on your site when you install Livefyre. Forget that double-display issue; it’s easily fixed. And I recommend Headway, highly, despite how tricky it can be to use.

Less easy to forgive is the now-you-see-it-now-you-don’t behavior that Livefyre exhibits. I’m even marginally OK with this, because I believe that eventually Livefyre will get it under control and in the meantime Livefyre users are getting something useful, regardless—and something that isn’t hurting them. In fact, it’s only sticklers like me who are likely to ever notice this bug in Livefyre.

The real issue is that Livefyre bloats your database—excuse the pun, please—hugely.

Immediately after turning on Livefyre, the database that runs Answer Guy Central had swollen by twenty percent. We’ve been building this thing out bit-by-bit for several years, and it grows at its current size and based on what we add by about two percent per month.

Eight hours later, with just one new story added to the Answer Guy Central Archives and approximately ten new comments from readers, the database had swollen by an additional ten percent. Clearly, something was amiss. We average about 300 comments and fifty new stories per month to make up our normal growth rate; Livefyre’s behavior seemed out of line.

The Livefyre employee I corresponded with on this matter gave me a great answer for why Livefyre was putting so much stuff in the database and even explained where the data was—or tried to; he was only partially correct. And it was a hot button for me, too; this approach is what lets Livefyre users keep all their Search Engine Optimization credit! But … there was a problem.

Livefyre’s explanation of what they were storing was that it was all transient data that would drop out of the database over time, unless there was a lot of comment activity. Well first, the amount of activity yesterday shouldn’t have created that much space if the second part of the statement was true, and since Livefyre’s job is to create lots of comment activity the idea that the database would shrink—ever—is in conflict with Livefyre’s purpose!

I love the idea behind Livefyre. I love the way Livefyre practices customer service. I love the way they try to do the right thing about your control of your own content. But I also love making sure our clients are well served in all regards, and Livefyre acts in a way that will absolutely cause problems at some point down the road. Weighing what Livefyre brings to the table against what it does ‘to’ you, I say Livefyre is the wrong way to expand your Influency.

Sorry, Livefyre. Do let us know when you’ve got your technical bag of tricks under control. Until then, we’ll be staying with in-house comment management. Because sometimes you just have to own your own cloud.