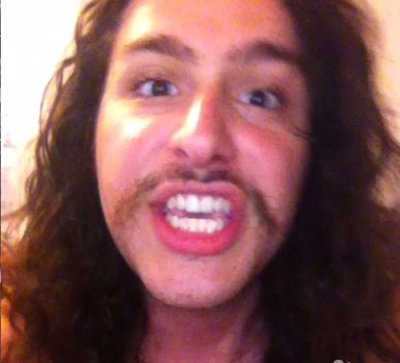 Yo, My Name is Nicholas, and this is Ridiculous. Got Mad Gummy Money, and it is Deliciousness

I’d like to introduce you to Nicholas Megalis. I’ve watched him sing a six-second song about deliciousness, ridiculousness, and ‘mad gummy money’ way too many times to remember, and Nicholas Megalis, via Vine, is now one of my favorite people in all of Influency.

Yo, My Name is Nicholas, and this is Ridiculous. Got Mad Gummy Money, and it is Deliciousness [chucka chucka boom]

I came across Nicholas’ gummy money/deliciousness/ridiculous song on Vine a couple of weeks ago. If you click Nick’s face above you’ll go to where we’ve immortalized it on the Answer Guy Central Tumblr page. Now please re-read that last sentence a few times, because it says more about Influency than I’ve ever cobbled together in such a short place.

After you visit Nicholas Megalis at Answer Guy Central’s Tumblr, and watch him sing, click the Vine logo to see him sing over, and over, and over—which is where the full impact comes in.

Ah, Influency. So many ways to make it happen.

Last week, I got into a conversation with our lead designer about the relative merits of Vine, versus those of Instagram Video. You may remember that when Vine found its way to Android last month I told you it was the most significant individual development in Influency I’d seen in quite a while. Instagram released its answer to Vine almost immediately, and some fascinating statistical gyrations took place even faster. After much back-and-forth in our Instagram vs. Vine discussion, I summed up my position this way:

Marketing-wise, I believe, scary as this sounds, that 15 seconds is TOO LONG, and yet (simultaneously) the most appealing thing about Vine is its looping characteristic, extending its range to infinity. So now we have two different approaches to the same thing. The question is which is “better”, and I believe the ultimate answer lies in what we danced around yesterday: Vine/Twitter is probably better for businesses with a message. But the unwashed masses are probably going to find Instagram more to their liking. And the app is more stable, too.

No problem, right? All you need to do to make Influency happen is decide who your target is, what they want, how—and where—they like to receive marketing messages, and whether the have enough of a sense of humor to handle people like Nicholas Megalis and his ridiculous, delicious, gummy money song. Oh wait: and then there’s how you present your Influency messages, too. If you haven’t already, click on Nicholas Megalis’ face at the top of this piece, and play his video at our Tumblr page. It plays only once. Follow the link you see THERE through to Vine and you get a looping version of the Gummy Money Song.

You’re In Charge of All That, Too.

And by the way: did you notice I’ve slipped Tumblr into this conversation? Tumblr is a lot more than just pornography.

I’d go on, but that would defeat the point of the message. We’re here to help you Make Influency Happen. ‘Nuff Said.