Who SAYS Bigger is Better ? 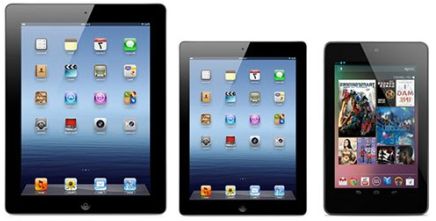 Draw whatever conclusions you like from this: Bigger is NOT always Better. I can just hear the wheels spinning in the heads of my younger readers and those with a certain sense of humor. Nevertheless, sometimes smaller is just right.

A couple of years ago, I told you that Tools are better than Toys, calling out both price and form factor in the conversation. And I got some flack for that position, not only from Apple fans who thought I was picking on the object of their affection but also from a few more-objective folks who took the position that a seven-inch tablet was really no better than a e-Book reader.

The market has spoken, and it turns out I had this one picked correctly. In the latest quarter, over two-thirds of tablets shipped were of the smaller form factor. That ratio will only skew further in Q3, as sales for the 2013 version of Google’s Nexus 7 make their way into new statistics. Because, bigger isn’t always better. Sometimes, better is better.

Let that roll around in your head for a second, and then ask yourself what ‘better’ has to do with Influency. The answer, of course, is everything. Get past the shiny-object stage of marketing and before (most) people pull out their wallets you need to be selling a product or service that does something people need—and understand that they need.

Which, of course, is the hard part.

As an example, I hold up the first service that our parent company, PC-VIP sold. PC-VIP seems to be a perfect storm of service, delivery method, and price; it’s a chance for businesses smaller than those typically served by, say, IBM to get great computer care and improve up-time, and do it for about 40% less than non-Enterprise-sized companies usually spend. It’s a no-brainer, and just plain makes sense. Except it requires a leap of faith that most businesses aren’t used to taking with their computer geeks. So while PC-VIP is profitable for us and works exactly as we promise for the clients that use it, it operates as a much smaller entity than ‘the brilliance of the idea’ suggests it ought to.

We designed something great, and then had no way to explain why it was great for potential clients who, often, were spending their own money. Over time, PC-VIP the company and PC-VIP the  service have evolved. PC-VIP the service is still available and still a great deal for our clients, but is a small part of what PC-VIP the company does. Our Influency shifted.

Now look at those small tablets again. Or actually, look beyond the simple bigger vs. better question to “what does this do for me?” Look at The Google Chromecast, or Chromebook. Think about The Best TV Ever, or the idea of the iPad Retina Display. Chromecast is better than its competitors in a few ways, but a harder sell than most to anyone who isn’t a bit of a geek. The Chromebook is all the computer you need, but hard to understand if you’re a typical addicted-to-Microsoft-Office computer user. Both the amazing 4K TV and Retina display have no real value; there’s no 4K content and likely won’t ever be, and most people can’t actually see what the Retina Display delivers.

It starts out as a marketing discussion, but eventually Influency becomes about your long-term ability to maintain the influence your marketing creates. That Chromebook? Only an example of Influency once you navigate the lines between Computers, Phones, and Toys. To maintain Influency the issues dividing cool from useful need to be merged.

Easy as can be. All you need to understand is everything.