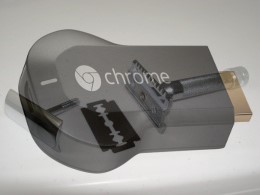 OK, so I got that out of my system. Last week, Google revealed their AppleTV Killer, the Chromecast. It came, for about 24 hours, with a three-month credit for Netflix, effectively dropping the $35 price tag on this little beauty all the way down to $11. And the Chromecast, assuming you have a TV with a USB port near its HDMI inputs, outdoes AppleTV, Roku, and every other device that can grab media content over the Internet and stream it into your TV by not needing an external power source.

I bit. I’m glad I did. So did a lot of other people, which explains why Google ran out of those Netflix credits so quickly. And now … it’s time to wait for the Chromecast to actually become useful. But wow is Influency in full force on this one.

As we’ve learned from the battle over Aereo and the question of WHERE you’re ‘allowed’ to ‘watch TV’, we’re shifting from an era of content owners controlling you to content delivery entities being in charge of what you see and how you see it—along with a huge range of choices that allow you to wrest that control away from them. And the Chromecast, aside from costing about a third of what an AppleTV or other options like the Roku does, gives you way more control than any other device on the market. Sort of.

And that’s exactly the way Google wants it.

There are a ton of breathless pieces all over the Internet talking up the Chromecast and explaining how it works. I’ll boil this down to just a few salient points:

And none of that matters, because the Google Chromecast completely changes the playing field in the video-content-over-Internet game.

More Apps will become available over time, making it practical to stream content from lots of sources through a Chromecast. Hulu is imminent. So is HBOGo. But that’s not even the real point; all the discussion in the world about things like the quality of a video stream from one source or another to your device of choice is heading toward a ubiquitous resolution. The issue is control of Everything through Influency. And Google’s Real Goal for the Chromecast is to Get You to Use the Google Play Store As Your Movie Rental Outpost of Choice. The Chromecast is the Razor, and Google-peddled Content is the Blade. The Blade is where the money comes from.

I’m glad I bought a Chromecast, and a bit gladder having gotten it at the $11 promotional price. And as someone who (mostly) has no problem with Google’s dominant market position(s), I see Google’s ulterior motives for using the Chromecast to get you to spend money at Google Play as neutral at worst.

Now the question becomes this: how do we get you to a position of real Influency in your markets?