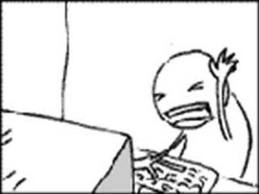 You know this guy. Cripes, you are this guy. Your computers make you crazy, because, let’s face it; computers are too hard.

When I wrote that story last year, I was thinking about file format incompatibilities. Specifically, I was talking about the way different video file formats interact when you try and splice them together, and my point was that although we know how to “make it happen” for you, it’s a shame that our clients need us for that—businesses end up having issues with what should be something simple; video should just be video.

Following up on yesterday’s story about Internet Connection Speeds, this whole video thing is on my mind today. A couple of weeks ago I told you about the seismic shift in business-as-usual and business computing that the new Google Chromebook represents. While I remain hopeful that the day will come where computers are simple enough to use and understand that questions like “Where’s My ‘Any’ Key?” will stop sounding so ridiculous (because they won’t be necessary), the truth is that so far there remain lots of places where even the simplest, most ‘obvious’ technology questions can become anything but simple or obvious.

There’s been some interesting comment activity on the Google Chromebook post. A few days ago, I was asked whether the Chromebook’s HDMI-out port actually works correctly. My answer is that it does—or did for me when I tested it. But in explaining that, I needed to include a few details that, while not in any way wrong, were nevertheless technically imprecise.

This won’t matter in the real world  to 99% of people, 99% of the time. But another comment pointed out the non-quite-accurate state of what I said. So I responded by (hopefully) explaining what I had said more precisely, but without overly complicating matters that should be kept simple.

And that’s the problem with computers and business change.

As easy and fast as computers make certain tasks that used to require time, work, and way more money that they now do, computers have never progressed beyond the underused tool stage for many people and businesses. Talk about ‘Tools vs. Toys‘! Yes, this is where I could put in a plug for PC-VIP or The Computer Answer Guy. And I guess I just did.

But I’m really just reacting like a person to a situation that’s getting no easier to deal with, and likely harder. We shouldn’t need to navigate issues like “video file formats”, period.

It’s almost enough to make me OK with the iPad and Apple as Control Monsters. Because now, it isn’t just Apple using H.264 as default. And standards, it seems, are getting more important every day.