Television is all about Influency. Media, content, copyright, and now, Aereo.

While television networks are beginning to lobby to get Aereo classified as a copy-right-stealing infringer of rights to their broadcast signals, I’m telling you, right here and now, that Aereo is nothing of the sort. It IS, however, a huge threat to the Influency plays that broadcasters have been trying to protect.

And they’re losing that battle.

You probably can’t get Aereo just yet. Fact is, the more remote your location the better chance you never will. But if you’re one of the nineteen million people in ‘the New York City area’, you can now watch live broadcast television on your computer (and some other devices) without going hunting for a pirated stream. And Aereo works, really, really well.

Aereo works by setting up antennas—actual, physical antennas— and when you connect assigning an antenna to you. This means that only as many people as there are antennas at Aereo’s server farm can get Aereo. Which sounds like a tough business model, but based on this picture and the opionions of several electrical engineers, isn’t as expensive for Aereo as it sounds. 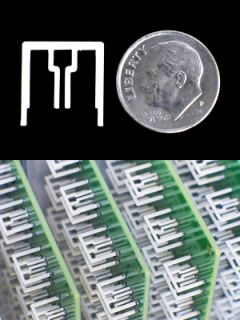 The Aereo antenna is the size of a dime. Aereo engineers are cramming about a zillion of them onto a circuit board.  And if your concern is that this is either hard to find storage for or expensive, well, it’s not. In fact, as anyone who’s ever increased the signal of their Wi-Fi with a cone made from tin foil or a radio with a simple wire can tell you, the Aero antennas can’t cost more than a few cents each.

So what’s the issue?

TV signal broadcasters see what Aereo is doing as stealing. So far, two courts have ruled otherwise, and now the television broadcast networks are —I’m not kidding—threatening to stop broadcasting their signals.

Which would be the single largest cut-off-your-nose-to-spite-your-face move in the history of American business. TV broadcasters have a long-since paid for—and generally, it was free—license to airwaves, and if they stopped broadcasting over those airwaves, they’ll lose them.

So this story isn’t actually about Aereo or the clones that they’ll engender once the legal challenges die down, and I refuse to believe that broadcast television networks will make good on their threats to stop broadcasting television.

What do you do when you see control slipping away?

The correct answer is that you adapt to business change. Media businesses have a long history of being even worse at this than most, trying as hard as they can to stop change from happening. And thos efforts fail, again and again. Pink Floyd slapped their record label around. Louis CK is smarter than most marketing executives. And on the television side of things the missteps seem to come almost every day, from almost every direction. Fox TV thinks iPads aren’t OK. Having previously committed, NBC won’t stop using FLASH. Despite the changes happening everywhere, the battle against unbundling of cable TV just keeps going.

Renegotiation ca happen any time. In that bundling/unbundling story even the normally no-change-is-good-change Verizon is trying to create a shift. And friends, just remember that underneath all of this is the simple reality that TV used to be free.

Still think creating video is too hard? Get aboard; your business survival depends on how you manage your Influency. We’re here to help.