Influency (And How True It Is That Google Owns Everything) 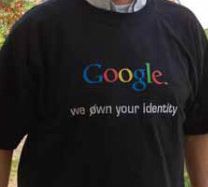 Cute Tee Shirt, Dude. Google does kind of own your identity.

Or as I told you a few months ago, before it became a matter of Influency*, and before Influency became of dominant and imminent importance, Google Owns Everything.

I can explain that quite a few ways, but of course because it’s true what I’m really saying is that there isn’t a definitive “answer” to SEO and the resulting Influency boost that Search Optimization provides. Not even from The Answer Guy!

Man, would I love it if Google would just reveal the recipe for their secret sauce.

We’ve pretty much figured out that recipe, by the way—although it keeps changing. And because that’s true, we’ve decided to simplify the matter; that’s what Influency* is all about.

The simpler this gets and the more Google owns your heart, soul, and yes, everything else, the more taking a clear-headed look at long tail marketing becomes. And while that may not sound terribly simple it can be—for you. Just contact me here.

No, you can’t Google yourself too much—mostly. But if you do, you’d best have your long tail marketing in order.

Answer Guy Out. Merry Christmas, and get ready for a real treat . . .