The Simplicity of World Domination (Google Owns Everything)

Back in the day, when I spent a lot of time being The Computer Answer Guy, I built my street cred giving a little talk about how you couldn’t go wrong being full-on into all things Microsoft. I’m no longer inclined to throw my mind and soul into the goings on of the folks in Redmond, and have gone so far as to suggest that Microsoft is becoming irrelevant.

Google is the new Microsoft. I’ll be telling you plenty about the long-rumored-and-now-finally-real Google Drive tomorrow, but today I want to show you something a lot simpler. It’s the kind of thing that will make Google Drive matter even though there are better solutions already out there and in heavy use. Ready? 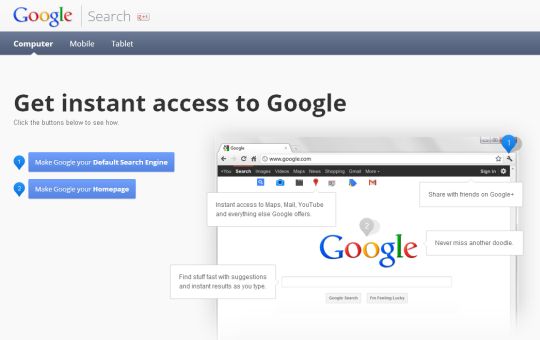 Go ahead, click that link and see what Google has waiting for you at google.com/insidesearch/getgoogle/. Now, you can get to Google’s Search Tools “as easily as possible”.

Never mind that if you wanted it you already had instant access to Google. With Inside Search Google is helpfully making sure that getting to them and using their search tools so that you arrive at the results Google wants you to see is easy! Hooray for you!!!

Obviously, I’m pointing out that Google is helping Google a lot more than they’re helping you. And that’s OK, really; Google is a business and most of what you get from Google is free (except for all that “giving up your privacy” stuff, of course).

My point today is that sometimes it’s simple things—like Google Inside Search—that have the largest impact on business change.

Google’s goal is to get you doing everything using their tools, whenever possible. Inside Search is a simple way to help make that happen incrementally. Now of course when you’re Google, small incremental changes add up quickly, but there’s a lesson here for everyone. Here’s an example:

About a year ago, I wrote this “Computers Are Hard” post. Much to my surprise (or not; after all, Search Engine Optimization is one of the things we do around here), that page is currently Google’s fourth-highest ranked page for the phrase “computers are hard”: 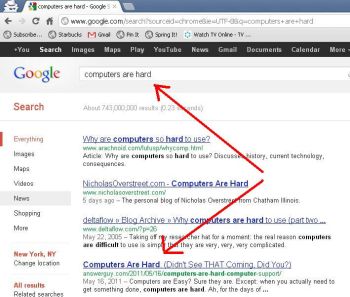 And it was (almost) as simple as writing that one article to get ranked fourth out of 743 million pages that Google sees as having to do with computers are hard. Almost.

Google—yes, even Google—is in the simplicity business. The simpler they can make it for you to use them all the time, in as many ways and in as many places as possible, the more money they make. At the end of the day, simplicity drives almost everything.

The key is knowing what you can do, and what you’d be better off leaving alone. So sure, you can do search engine optimization all by yourself, and perhaps be as effective as we can be for you—but you probably shouldn’t. Not because SEO is all that difficult, but because Google keeps changing the rules.

Get ready for my thoughts on Google Drive; you’ll be using it soon. Even if, like the NOOK Simple Touch With GlowLight, you probably shouldn’t.