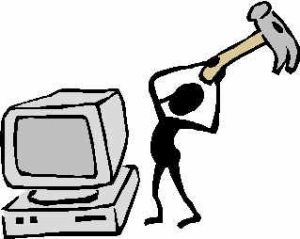 Remember the little “peanut men” of clip-art, circa 1995? It was a simpler time. Telephones were telephones, computers were computers, and unless you were The Computer Answer Guy, ne’er did the twain meet.

You want that time back, don’t you?

Yesterday’s post about bandwidth speeds being too difficult to qualify sent me on a trip down memory lane. Pinpointing how fast your downloads are running really can be hard, there are no “Any” Keys, and in general, computers are too hard to use.

As hard as computers are, we’ve been using them for a short enough period that when computers are difficult we’re frustrated—but not surprised. Not so with telephones.

You learned to use a phone when you were very young. Even when my youngest son was five years old there was never a doubt about him knowing how to get hold of me, because everyone knows how a phone works. Everyone. If I could get him to memorize ten digits, he could reach me, period.

This week, I heard from a reader who started off a question by asking (simply, he thought) “Who makes a Skype phone that works?”

Well, there’s not really such a thing as a Skype phone, and assuming he had a particular problem (maybe he had even read my story about The Nexus 7 and Google Voice),  I said so:

I’m afraid that’s the wrong question. Skype works (as do other VoIP solutions). VoIP works. The issues are having a phone with access to reliable data services that aren’t being blocked or messed with by your carrier. Could you tell me more about your particular problem?

His answer truly surprised me: I have Skype Pro and have used it for years but my daughter wants to use it with a cordless phone looking at the comments on Amazon,etc about these phones 50% of users complain about a variety of things.i thought it strange that Skype now being a big player did not have their own #1 rated phone.

Simple. Reasonable. Well thought out. And missing the point. What IS a phone, anyway?

“Cordless Phone” implies that you mean a phone in your home, either plugged into a phone carrier through a standard wall jack or plugged into your Internet provider through a router than has the same kind of jack as a phone—the exact same jack that “phones” have always used. But that has nothing to do with Skype.

Skype isn’t a phone company. They just move lots of bits over the Internet, and those bits are either assembled into voices, or voices and video. In this case, we were talking “just voice”. If you have a phone that’s attached to the Internet through a router, then you sort of have what you need, but in reality, it’s moot because for most people connecting through the Internet means you have already removed the phone company and per-minute charges from the equation. You don’t need Skype. Done deal.

Except: if you want video, then you need Skype, or Google Hangouts, or AOL/AIM, or something . . . at which point you aren’t talking about a phone any more. But THAT means you’re either tied to a computer, or a mobile phone—not a “cordless phone”.

Bottom line: there’s no need for a “Skype phone”, and that’s why there isn’t one. The ONLY people who need one are people who are making international calls, which so far still aren’t free, and want to use a land-line phone.

Yikes. So much for simplification.

This is why the ūmi didn’t work. It’s why years ago, people could wonder whether maybe IBM was running Skype. It’s how questions like “Do You Have a Program Called Skype” end up getting asked by ill-prepared technical support people. Phones (and for that matter video conferencing) have to be easy, or they aren’t real.

It’s why we’re getting ready to drop the Influency bomb.

When all is said and done, the biggest and most important business change you can make is simplification. Want to talk about it? You can reach me here.