ChromeCASTing with Google’s Chromecast? Not Likely 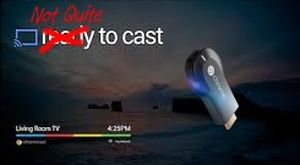 When Google unleashed Chromecast, I told you that given the chance that you should grab one. And I’m standing by that statement; at just $35 the Chromecast is a send-video-to-a-TV game changer. But as time passes and clever programmers find ways to make the Chromecast even better, Google is going out of its way to thwart those efforts. This is a story about control, and Influency.

Yesterday, a phalanx of not-very-technical technical writers were complaining that Google had broken Chromecast’s ability to send almost anything to your TV via API calls that one highly regarded programmer had exploited. And it’s true; Google is protecting and controlling the way the Chromecast is used, and the most likely reason for that is Google’s desire to stay on the good side of big media companes.

You’re probably waiting for me to come down on Google for this, and a piece of me wants to; after all, Google promoted Chromecast from the moment it was introduced by talking about how you could drag any video into a Chrome broswer window and ‘cast’ it to the Chromecast device in a TV. So far, that hasn’t changed, and it doesn’t look like Google is actually planning to change it. Of course ‘any video’ really means ‘any H.264-encoded video housed on your Chrome-using-computer-and-not-tablet-or-phone’, but that’s a different issue than whether you can use other formats, stored in the cloud, with your Google Chromecast.

What’s happening here is that Google has decided—correctly—that they need to control as much of the user experience as they possibly can, both so users stay happy and so they don’t need to provide support other than when absolutely necessary. I told you about the robotic ‘because it isn’t a phone’ response I got from Google when they released the Nexus 7, for example, and I’ve experienced a similar response to a request for support with the Chromecast; when I dropped Google a line asking how to deal with intermittent connection issues and posed my question such that there could be no doubt I was way past this level of problem I received the following canned silliness as a ‘response’:

Thank you for contacting Google Play! I see you are having problems getting your Chromecast set up. I will be happy to assist you with this. I understand how frustrating this can be.

If you’re trying to cast from the Chrome browser and can’t see the cast icon, try the following steps:

Note that if you are trying to cast a pop-up window flash player, the cast icon may not automatically appear. To work around this, right-click the title bar and show as tab.

If you have any further questions or concerns, please feel free to reply directly to this email. Also, you can visit our help center at:

And again, that’s the point. The Chromecast is being locked down, both because Google needs to protect its media business relationships and because Google can’t have us pesky users asking questions that go beyond their ability to answer without putting any thought or effort into the matter.

Long-time readers will note that this is the kind of thing I’ve picked on Apple for, many times. Most strongly, I eviscerated AppleTV specifically because you could only use it the way Apple wanted it used. The difference, though, is that AppleTV is also set up in such a way that unless you’re a Macintosh user you get a substandard experience. Google’s Chromecast and their manner of control, while business-related, is platform-agnostic—at least so far.

The Google Chromecast, while a work in progress from a functional standpoint, is a brilliant example of Influency and the right way to implement that control-your-customer-through-every-step-of-your-relationship process. And while you aren’t likely to ever have quite the Influency advantages Google enjoys, there are lots of places where you can hone your business processes to make Influency happen in your markets.

Want to talk about how?