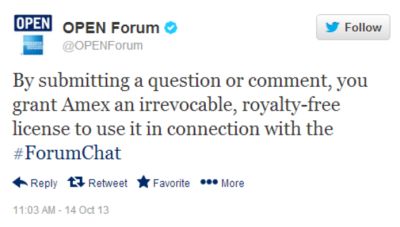 In case the importance of building content and content’s effect on Influency has eluded you, today we’ll be using AMEX Open Forum as an example of just how important Influency is and how seriously you need to look at managing the many elements of said Influency.

And we agree. And thanks, AMEX Open Forum; we’re adopting your idea as our own. Here goes:

By submitting a question or comment, you grant Answer Guy Central an irrevocable, royalty-free license to use it in connection with WHATEVER WE DECIDE MATTERS TO US.

This isn’t a small matter. A few months ago I told you about receiving a couple of requests that we remove content here, and that we’d refused to do so; those words are magnetic; they attract visitors. Those words build Influency, and they’re staying here until we decide they aren’t needed any longer. It’s good enough for AMEX Open Forum and Buzzfeed, and it’s good enough for Answer Guy Central.

Oh yeah; it’s good enough for you, too.

All of this is tied up in the idea of what makes Google think you’re important. And if you’re thinking that means I’m about to go off on a rant about Optimization you’re right—and wrong. Optimization matters and in the most cynical sense those comments are most valuable as Google bait. But Google also likes creative and useful content, and adding to your content using others’ words is the definition of useful, if not always terribly creative.

It’s also the reason I came out against guest blogging recently. I still believe in coopetition, and an inbound link or two from someone bigger than you is a terrific thing. But long term, you do a lot more for your long-tail marketing efforts building Influency at home than you can building Influency elsewhere.

And if you’ve been following along, yes, this is the reason I don’t think having a system like Livefyre manage your comments is generally the best idea, and at least peripherally is behind our position on image duplication in the content we create. Thanks AMEX Open Forum; your words are priceless (whoops; priceless is a MasterCard thing).

Now: if you want to talk about building Influency the AMEX Open Forum way, so do I.