Flunking College or Didn’t Get In? Blame Social Media! 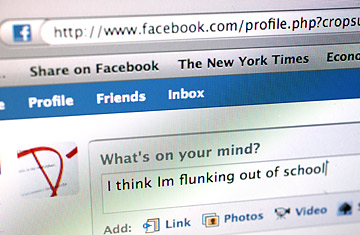 I’ve been known to talk us up in my writings here, and without discussing the idea of self-promotion and whether it’s a good idea, I can state factually that I’ve been ahead of the curve on the topic of keeping your misdeeds and questionable behavior off social networks and out of social media. For example, back in 2009 I told you about the problems that this case about the girl who libeled her landlord on Twitter were going to cause, and the ridiculous level cheating on exams could reach when social networks become part of the equation.

There have been other examples of me worrying aloud about social networks being used in stupid ways, usually by young people. The girl who took to Twitter to complain about her Christmas presents was one of my favorites, and the general idea that unless there’s a context requiring it writing profanity is just a bad idea is never far from my mind. But the examples that relate to obvious things like talking trash about your employer or posting drunken self-portraits on Facebook just keep on happening—and remain an abject mystery to me.

Now, The New York Times has jumped on the “stop doing dumb things in public” bandwagon. Better late than never, right? Last week, this piece in The Times talked about how colleges are watching social networks, both to monitor their students’ behavior and that of applicants. Fair warning: if you find that creepy you probably aren’t going to like the rest of this story.

Quite a few years ago I asked my kids to let me follow them on their social networking accounts. I’m a divorced father and my motivation was it seeming the simplest way to know what was happening in their daily lives without being obtrusive. And they had no problem with the idea; somehow Dad wanting to know what they were up to didn’t feel like snooping to them. But they also knew that their father had good intentions, and this was long enough ago that the social network in question was Myspace, where only people you had given explicit permission to follow you could see what you were up to.

Today’s social nets are different. While you can set up security if you slog your way through a bunch of hard-to-understand settings the default condition on both Twitter and Facebook is “everyone can see what I do and say”, and even LinkedIn lets the public see plenty and your connections see more than you might have intended, until you take steps to change that.

And that’s just the way it is. Have whatever reaction you like to privacy’s death, but if there ever was such a thing as privacy, it’s gone. So the issue, if you have something to hide and don’t want to take the time and steps to cover your tracks, is that you simply need to keep the stuff you don’t want the world to see off social networks—and for that matter, even your own web site, Tumblr account, etc.

Now, think about that whole “creepy thing” from a different perspective for a moment. Maybe it isn’t so much that people are snooping on you, but that they’re keeping tabs on their own Internet presence. This is called Reputation Management, and it’s one of the things we do here for our clients—and one of the things that smart businesses like Koeppel Nissan are taking on. And it’s a part of the Influency Equation. You are paying attention to Influency, right?

You get it. Kids are different, privacy is gone, and it’s your job to manage all of this and the rest of your reputation and Influency issues. Feeling overwhelmed by the whole thing? Contact me here.