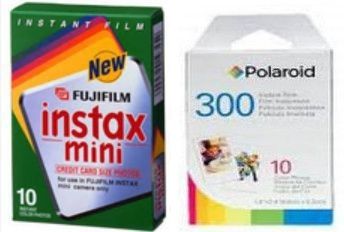 These two boxes contain the same thing. Not the same thing in the way generic pharmaceuticals are the same, where the drug is chemically identical but might be produced differently by one manufacturer than another, by the way; Fuji and Polaroid Instant Film are EXACTLY the same item, produced in the same factory by the same company and then packaged two ways.

OK, so they differ in one way: The Polaroid-branded version of the film costs about 80% more than Fuji instant film.

Seriously, that’s the only difference. And when I found myself looking for instant film recently and located it at B&H Photo, the saleswoman at B&H all but refused to sell me the Polaroid version. She had both in stock. Her company makes a lot more selling Polaroid Film that Fuji. I was picking up the film for a particularly picky client and explained that to the young lady at B&H. And she persisted; I was not getting out of B&H with Polaroid film when Fuji was there for so much less.

I’ve mentioned before that every now and again someone does customer service so well that I wish we had a Wall of Fame to go with The Answer Guy’s Verizon Wireless Customer Service Wall of Shame; B&H Photo surely would have earned their place on the good side with this move. And the thing is, while customer service can take time—which, let’s be honest, equals money even when there’s no accounting transaction you can associate directly as in this case—it isn’t difficult; customer service mostly requires only that you care about your customers enough to perform the service part. And there’s nothing more Influence-y than the Influency you create by showing your customers that you care. Ask Joe Clem at Koeppel Nissan.

No need for me to go further; nice job, B&H Photo.

What about you? Are you thinking it’s time to get serious about how you pursue real Influency?