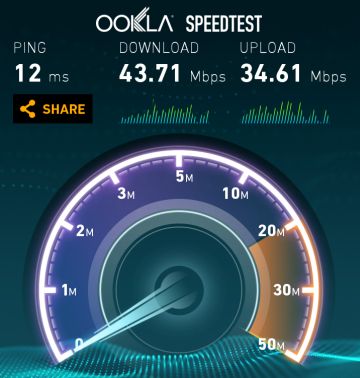 I’m writing this as I sit in the service department waiting area at Koeppel Nissan. You may remember that when I bought a Nissan at Koeppel about a month ago I had great things to say about customer service at Koeppel, and about the way Koeppel’s General Sales Manager Joe Clem does business.

I’m back at Koeppel today both to address some paperwork and to check out an anomaly in the way my car is tracking gasoline usage. And I’m hoping the latter problem gets resolved more easily than it’s starting to look as though it might be. But as I sit here waiting for Koeppel’s customer service machine to do its thing, I’m experiencing the single best Internet speeds I’ve ever seen, on Koeppel’s Verizon FIOS-driven public network.

I ran the speed tests several times, and what you see above was the consistent result; Koeppel Nissan’s WiFi connection is delivering about 40 mbps of connectivity, both for uploads and downloads.

Of course, just giving out great Internet access isn’t enough to make problems with the Nissan Koeppel sold me OK if it turns out—as it’s beginning to look like might be the case—that Koeppel can’t help. But as I sit here watching the day tick away at least Koeppel Nissan is helping make my time in their service waiting area less stressful than I’d expected. And that’s Influency.

Maybe you’re wondering why I’d bother devoting a whole post to something as seemingly trivial as the WiFi speed at Koeppel Nissan. Surely, I have better things to do with my time, even stuck in Koeppel’s service department?

Like most Influency-related issues, the answer is context-based. Joe Clem knows I’m writing this piece, thereby talking up Koeppel Nissan while simultaneously upping the odds that when someone searches for ‘koeppel nissan customer service’ they’ll come to Answer Guy Central. Remember: solving the Influency equation includes paying attention to things like long tail marketing, and optimization.

Koeppel Nissan and Joe Clem are all about Influency, and that’s why they make sure that the Internet connection is solid when their customers are awaiting service. I’m unhappy to be here, but I’m also aware that at least I’m not sitting in a Starbucks while I wait for Koeppel to help me.

See what I did there? Making Influency happen takes a strategy to track and work on quite a few issues. And you can do it, all by yourself.

Or even better, drop me a line. With any luck I won’t still be sitting at Koeppel Nissan.