One of the most-distributed television stations just gave a lesson on how to find pornography. Think that’s a problem? Here’s a bigger one: WGN Chicago figured if they deleted their reference to it and denied involvement, it would cease to exist.

And speaking of loads, this story holds loads of examples of how Influency works.

Let’s start with the obvious: unless WGN was seeking to become the world’s utmost authority on pornography, letting a piece run on their airwaves that included this veritable how-to-find-porno reference was just plain stupid. And we can address that quickly: WGN had no such intention or they wouldn’t have deleted reference to the piece from their web site.

That said (and with purpose stated clearly), let’s talk a bit more about pornography.

As quite a few of the comments on the piece at AOL Jobs point out, pornography is not just commonplace but probably the most popular use of the Internet. Whatever one’s personal opinion of either porn’s popularity or the propriety of that situation, it’s reality, and Yahoo! legitimized porn when it bought Tumblr. Sure, you can fight it as Microsoft does with its official position on how you use their Skydrive service, or as Google does by refusing to run AdWords ads on pages they believe are about pornography. But denying your documented-if-unintentional promotion of pornography? That’s not the way Influency works, WGN.

And oh yeah: maybe you’ve noticed that because of my liberal use of the word “pornography” in this piece, some of our Adwords ads aren’t running here. Wonder how that’s possible? Remember this story about <H1> Tags? In this case, that level of Influency is being trumped by the same kind of filter I mentioned in the passage about expunge.io and WGN, above, and in the story here. 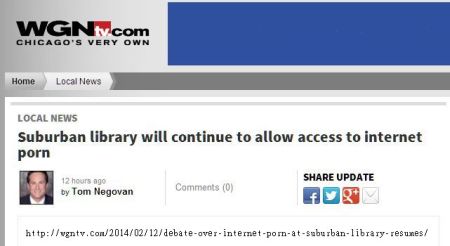 Do you understand the real Influency points I’m making? Are you ready to get serious about managing your business’ Influency? Contact me here.