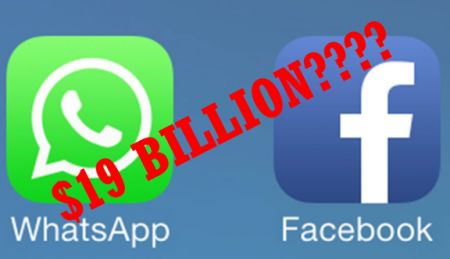 Imagine owning a private company. You’ve sold a small portion of that company to Venture Capitalists for a bit under $60 million. And then suddenly you get acquired in toto for $19 billion.

If you’re WhatsApp, that’s not just a dream. A few days ago WhatsApp was indeed acquired by Facebook, and assuming the founders continue working at Facebook for the next three years the total purchase price will in fact be $19 billion dollars. And this, the highest-priced acquisition ever of a non-public, venture capital-funded company has been all over the news, but indulge me as I repeat the figure: Facebook has paid $19 billion dollars—yes, billion with a “B”— for WhatsApp.

Facebook just paid $19 billion dollars for an instant messaging App, even though there was already one baked into the core Facebook service.

Still trying to wrap your head around that figure? This post at CNN breaks down the numbers, and concludes that at $19 billion, WhatsApp was actually a bargain. And Facebook CEO Mark Zuckerberg, who’s matured considerably since Hoodiegate, has said as much out loud. Facebook didn’t care about the WhatsApp App; it simply bought the nearly-half-a-billion WhatsApp users for about $40 each.

If you believe that acquiring customers is the best way to build Influency, then Facebook’s $19 billion purchase of WhatsApp actually makes sense. For real. It sounds incredibly expensive when you compare the $40/user figure to, say, the $3-or-so Yahoo! paid for Tumblr last year or the $10 bounty Facebook paid for Instagram, and the idea that anyone would buy customers at this price at this scale is a bit mind-blowing. But Facebook, a web site that looks less and less interesting in its one-size-fits-none social networking persona, can’t do small acquisitions; they simply wouldn’t be meaningful.

Kudos to the WhatsApp guys for extracting this much money from Zuck & Co. Try to view the $40 per user number not as a gross figure extended for large acquisitions, but instead compared to what it costs for a small company to acquire new customers. I’d be ecstatic if I could acquire new customers either for Answer Guy Central or for our clients, at that price. Facebook had the money and WhatsApp was entree to a huge number of advertising-impressionable eyeballs.

Move past the cost questions and we get to the real meat of this issue: People like texting. I hate texting, personally, but I do it and in our always-connected and constantly-distracted world texting, even as it becomes more and more rude is also more and more influence-y. So the market Facebook is throwing $19 billion into is a big deal, too. And oh yeah: Facebook/WhatsApp has announced it’s about to start competing for the heretofore-Skype-dominated voice-over-Internet market, too.

Depending on how you look at it, $19 billion for WhatsApp starts looking pretty cheap. And that’s what Influency is all about; figure out the best way to become ubiquitous, and the world can be yours. Bwah-ha-hah!