Zuckerberg’s Hoodie As Measure of Maturity

You know that scene in The Social Network where Facebook boss Mark Zuckerberg looks down his nose at an attorney and talks to him as though he was pond scum?

You have part of my attention – you have the minimum amount. The rest of my attention is back at the offices of Facebook, where my colleagues and I are doing things that no one in this room, including and especially your clients, are intellectually or creatively capable of doing.

Whether Zuck ever uttered those words or anything like them doesn’t matter, but during Facebook’s pre-IPO road show this week, young Mr. Zuckerberg made a even bigger statement without ever opening his mouth.

Horror of horrors, Mark Zuckerberg wore a hoodie to a meeting with a bunch of guys in suits.

Let’s pretend for just a moment that Hoodiegate matters. Let’s ask, was Mark Zuckerberg thumbing his nose at the Wall Street establishment, which would be, well . . . rude? Was Zuck specifically sending a “I’m more important that you” message? Or was he simply being young—and disconnected from social “standards”? 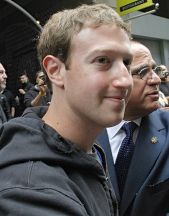 And yes, I’m aware of the irony of that last example—wherein the CEO of the world’s largest social network has no social graces.

Now let’s move on to the real point: none of this matters one bit. Whatever his reason was for wearing his standard uniform instead of the uniform preferred on Wall Street, Mark Zuckerberg doesn’t care what anyone else thinks—and doesn’t have to.

None of this is even worth talking about, except for the parts that have to do with societal and business change. Parse the now-infamous words of Wedbush Securities analyst Michael Pachter:

“He’s actually showing investors he doesn’t care that much; he’s going to be him. I think that’s a mark of immaturity. I think that he has to realize he’s bringing investors in as a new constituency right now, and I think he’s got to show them the respect that they deserve because he’s asking them for their money.”

If you think Pachter’s correct, we’ll just have to agree to disagree. Zuckerberg doesn’t have to show anyone respect, and much as I believe that A) Mark Zuckerberg is the wrong guy to lead Facebook as it moves forward and B) should not have the amount of operational control he’s being handed in the stock filing for Facebook, to suggest that he had to dress better for a meeting with a bunch of people he has no need nor desire to impress is just talking like a person trying to pump up his own importance by clinging to an outdated status quo.

Mark Zuckerberg doesn’t care about status quo. And neither should you.

Mark Zuckerberg is smart enough to know that even he can’t out-negotiate the President of the United States; when he met Barack Obama, Mark Zuckerberg put on a suit.

And not that I enjoy saying nice things about Mark Zuckerberg—or Facebook—but one that is incontrovertible is this: Facebook has created real change.

As the issuance of Facebook stock on the public market approaches, by all means be concerned that Mark Zuckerberg has the authority to drop a billion dollars on nothing more than his say-so on something as inconsequential as Instagram. Recognize that Facebook should be a little bit more concerned about the threat from alternatives like Google+ . Rant, if you like, about the brashness of young Mr. Z for wearing a hoodie to a business meeting with people he can buy and sell before lunch on any given day. Ask, even, whether that behavior is up there with texting during sex or texting during a meeting, right in someone’s face.

But please don’t get caught up in debates about hoodies. Mark Zuckerberg is simply not playing by anyone’s rules but his own. And he doesn’t need to. And that’s business change.

Hoodiegate:  it’s almost enough to make me question my oft-repeated statement that older people are smarter than younger people.