What Happens to Influency When No Linsaniacs Are Left? 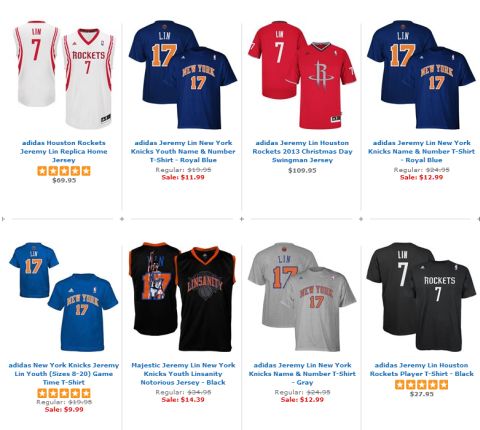 NY Knicks Linsanity is On Sale

Everything is for sale. Sometimes, things that you’re having a hard time selling aren’t merely for sale, they go on sale. This is not something you want. But as the Linsanity page at NBA.COM illustrates, when you’re stuck with old inventory, its better to get something selling it than nothing throwing it away.

I thought of this a few days ago when I noticed a handful of people wearing NY Knicks Linsanity jerseys walking around The Big Apple. You may recall the international craziness that Linsanity was for a few weeks in February 2012, but if you’re a New Yorker your love for all things Linsane died when Jeremy Lin left the Knicks a few months later. Perhaps the new Linsanity I witnessed recently was a response to the Knicks’ underperformance in this year’s NBA season.

Two years later, the NBA is still sitting on a bunch of Knicks-era Jeremy Lin and Linsanity merchandise, and you can get yours cheap.

But why would you want any?

It turn out that like fame, influency can be fleeting. Jeremy Lin is a serviceable but not spectacular basketball player, and unless you’re in the Houston area—where he’s only about the fourth-best player on his new team—Linsanity is over. I suspect Jeremy Lin is happy for his more peaceful life, and those old shirts aren’t his problem. But what if he’d made his career as a marketer of Linsanity rather than an athlete?

This business change stuff keeps coming back to haunt us, huh?

Most of us don’t have the luxury of doing just the thing we’re great at and getting paid eight figures per year for it. That’s what Answer Guy Central has always been about; we do the stuff you don’t have time to do yourself. It’s also what’s behind Video Network One, our new everyone-can-be-a-video-star-and-get-paid-a-bunch-for-it service. Truth be told, it’s what business change and Influency have always been about; you need to see what’s coming, and adapt.

Unless you want to sell your stockpile of New York Knicks Linsanity jerseys for way less than you’d planned when you had them made.