Apple and U2 Bring Music BACK to a Place Called ‘Vertigo’ 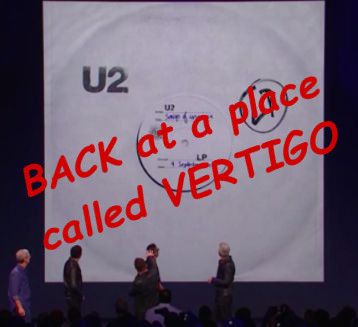 Kim Gjerstad and MailPoet, you’re on the back burner today. We’re bringing music back to a place called Vertigo.

Apple announced a couple of things yesterday that should have everyone in the music and banking businesses very, very nervous. PayPal and Square, I’m looking at you.

As you know if you’ve read me for any length of time, I’m no fan of Apple. The business geek in me admired—but the consumer hated—how great a job Apple did exerting amazing control of everything it touched throughout the Steve Jobs era, and ever since Tim Cook took the reigns I’ve felt as though their hold on all they wish to strangle has been slipping away. And then, yesterday happened.

I don’t care about the iPhone 6. I had a brief, almost imperceptible blip about that when I was looking at the Apple Watch and realized that there’d be no use for one unless I dumped Android for iPhone, but that passed. And then I gave it some more thought and realized that , Apple Pay is Apple’s new iTunes.

Bringing Music Back To a Place Called Vertigo

iTunes has an exclusive on U2’s new album Songs of Innocence, at least for a few weeks. But Apple won’t be selling a single copy; Songs of Innocence is free for all iTunes users. So much for the ninety-nine cent sale Amazon ran with Lady Gaga a few years back. Did Apple pay U2 a boatload of money? You bet; they’re U2. What’s interesting, though, is that the music business, which Apple pioneered in its current form, completely dominated for a time, and still ranks as the largest player in by miles, just changed in a way that’s likely to be the last nail in the proverbial coffin of traditional music labels.

At the Apple event yesterday U2 acknowledged that the money in the music business hasn’t been in the music for quite a while. That’s a way larger problem for small local bands like Rabbit Troupe than for established music business behemoths like U2, but it represents change for everyone. And so even Apple, the largest seller of music in the world, is tweaking the formula. Apple paid U2 for Songs of Innocence, won’t make back a nickel directly, and still got a great deal because there’ll be a revenue stream moving forward from every person who grabs their copy of Songs of Innocence through iTunes.

The most intriguing feature of both Apple Watch and the iPhone 6 is that you’ll be able to use them to pay for things just by tapping them against new terminals that Apple will be designing and I’m guessing giving away to any retail merchant that wants them. The technology behind this is called NFC, and it’s been around for a few years. Google has failed to establish a beachhead in mobile payments using their version of NFC. A consortium of mobile phone companies, working with AMEX, no less, has failed with Softcard. But Apple has an awful lot of rabid, use-anything-the-mother-ship-sells-them fanboys who are going to buy iPhone 6 devices, buy Apple Watches, and gleefully jump around when their local 7-11 lets them pay for Big Gulps with a tap.

Apple is back. Oy.

Contact me here if you need help figuring out how to get your business through these choppy business process seas. We really are at a place called Vertigo, and Apple is the mayor.