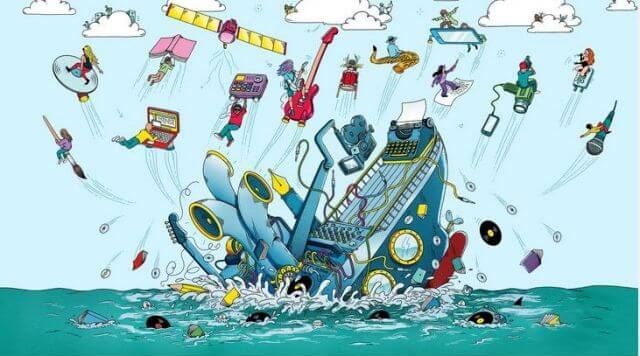 Life, as we all know, imitates Art. Unless it’s the other way around.

The media business has long been a great example of nobody being quite sure what activity drives which, and recently a long piece in The New York Times Sunday Magazine waxed not-especially-prolific—nor especially profound—on the matter.

Snark notwithstanding, that statement is less about judging The New York Times Magazine article than a commentary on how little pretty much anyone understands this new media stuff.

And yes, that’s an invitation to contact us if you want help. But I digress.

The Creative Apocalypse That Wasn’t

We’ve been talking about media ever since we started spouting business change at Answer Guy Central. Fully six years ago, for example, we told you about Pink Floyd’s victory over their former record label, and it’s been almost that long since we offended former New York Times technology columnist David Pogue by questioning his understanding of how copy protection works.

More broadly, we re-capped a few issues in the piece I See Your Lips Moving, But You Aren’t Saying Anything in 2012. The issue keeps re-appearing; I’ve even gone so far as to talk about one of my sons’ attempt at becoming a record label impresario in a world where the idea of the record label may not mean anything.

The Creative Apocalypse That Wasn’t is a pretty good way to describe this issue. Pretty much every discussion of the subject has been based on doom and gloom in the face of business change; Creative Apocalypse has been predicted too many times to keep count. But as the Times article points out, in most ways the creatives being referenced in the phrase “creative apocalype” are doing just fine—sometimes, better than ever—and in point of fact there are way more opportunities for less-famous artists to thrive than there were in the day when Pink Floyd’s record label signed them to a contract ultimately found to be less inclusive than the label would have liked.

What’s changed is the way art get delivered, and the power equation behind that change in delivery mechanism. Which sounds dull.

If there’s been a creative apocalypse, it has very little to do with changes in business power structure favoring artists over companies. However, as time goes on it is becoming harder for fringe players to get noticed—anywhere. How many television programs have you tripped on for the first time, only to find out they’ve been on the air for several years? What about Internet-based content? We get about a thousand visitors a day here, and in some contexts that makes us huge; we’re solidly in the top 1% of all web sites in popularity. But we sure can’t keep the lights on based on advertising revenues, so we aren’t a media vehicle—as we designed The WordPress Helpers to be.

All of this is about change. And change, while not always easy to navigate, isn’t a bad thing so long as you can chart yourself a path. Once again, we’re here to help if that appeals to you.

There is no creative apocalypse. What you’re seeing is merely the path that business change is taking.

Just wait until our next piece. Talk about a creative apocalypse: Design is Dead.