The Importance of Saying What You Mean 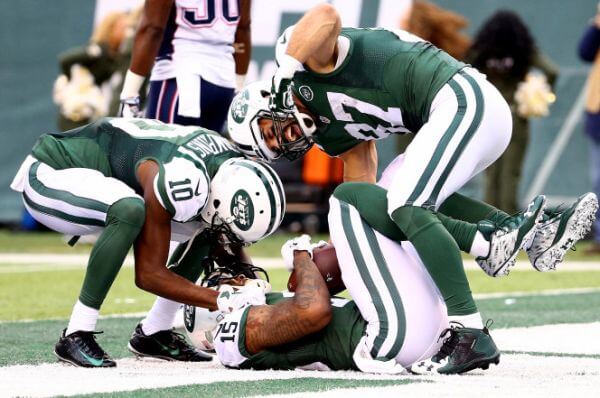 Let’s talk about saying what you mean.

The idea might not seem to be terribly relevant to three large men rolling around on the ground, but had another large man not failed in the saying what you mean derby that took place just a few minutes before this picture was snapped there would have been a very different story to tell.

And The New York Jets have bumbled their way out of the upcoming NFL playoffs, but when the question of saying what you mean came up a couple of weeks ago things looked very different.

Saying What You Mean

I’ve taken issue with the NFL before; its stance on use of the term “Super Bowl” is mind-numbingly draconian, and the NFL walks a very odd line between capitalism, socialism, and whining about an anti-trust exemption they just don’t deserve. But as with most businesses the NFL has a long-standing history of precision in language and it popped up during the coin toss preceding overtime of a recent game.

The New England Patriots won that coin toss. Inexplicably, they elected to kick off, which is a strategic mistake, period if you understand the rules associated with regular-season NFL games going to overtime. New England’s coach Bill Belichick understands those rules and is known as one of the great strategists in NFL history, so despite his claims otherwise it’s difficult to believe he intended to kick off, given the choice.

What happened is that Patriot’s player Matthew Slater said the Patriots wanted to kick. The options are to kick, receive, or choose to defend a particular goal. Presumably Slater meant to opt for the latter, but it isn’t what he said. The saying what you mean issue cropped up here. It was sloppy. It was unintentional. And once that horse left the barn it didn’t matter.

There’s a precedent.  In the 1962 AFL Championship game, the Kansas City Chiefs’ Abner Haynes won the overtime coin toss and said “we’ll kick to the clock”. The wording was unfortunate; what he MEANT was that the Chiefs wished to defend a particular goal, and was assuming that selecting that would cause the other team to make the secondary choice of receiving. But Haynes said “we’ll kick”. It was not an example of saying what you mean, even though he meant it to be.

On the Internet, the smallest of tweaks to your marketing language matters. Unless you’re Kim Kardashian, no-one is waiting for you to talk; you need to cut through the noise to get any attention. And that starts with simply saying what you mean. Just ask Angie’s List how easy it is to blow away trust.

Want to talk about saying what you mean and how you can do a better job of it?