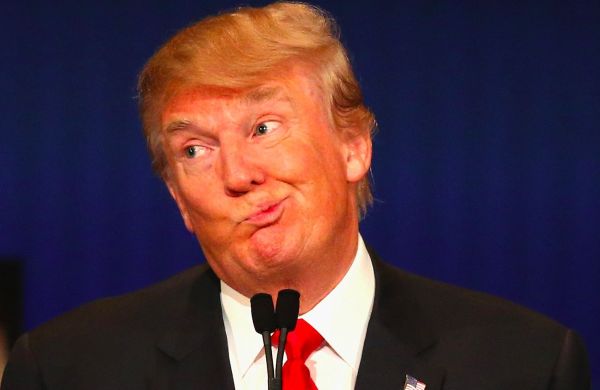 Rhetoric is a powerful thing. Just ask Donald Drumpf. Adjusted rhetoric is even more so.

OK, so in the case of Mr Trump, adjusted rhetoric goes only so far. He’s terrifying, and the fact that after TrumpDrumpf won a bunch of primaries during yesterday’s Super Tuesday festivities he sounded … like a bit less of a maniac than he has … doesn’t change that. How horrifying is The Donald? Google reported that the #1 search term last night was “how do I move to Canada?”

No, there’s no liking Donald Trump, and toned down rhetoric doesn’t change that.

While rhetoric is a topic that makes me uncomfortable in a lot of ways (I’m more of a hit-you-upside-the-head guy than one who puts out read-between-the-lines messages), it’s difficult not to acknowledge the importance of both TrumpDrumpf-like communications patterns such as those in the second definition you see here and more subtle speech. In Internet Marketing this adjusted rhetoric idea might be even more important than it is in real life; there are so many people clamoring for our attention all the time that the subtleties of your message often matter as much as the message itself.

This of course leads to another issue: it’s becoming more and more important that you learn to communicate using a level of precision that is unnatural for most people and—potentially—can come off as incredibly pedantic. You know, the way that sentence itself illustrates. Too many words, Mr. Yablon.

Nevertheless, in Internetville, the worst thing you can do to your messages is place them in the realm of the misunderstood. Or as we put it a few years back, don’t get caught in a place where your lips move but I can’t hear what you’re saying. Painful and painstaking as it might be, adjusted rhetoric matters.

Need help with those adjustments?