Postmates Is Not About The Food 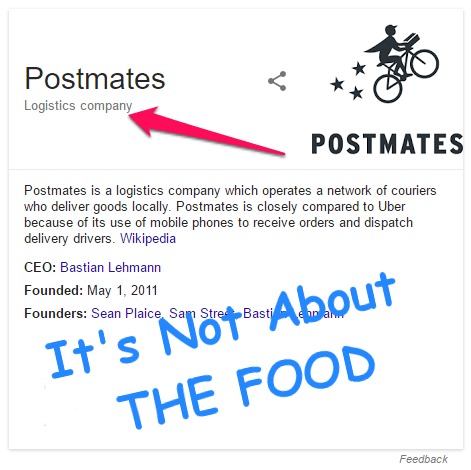 Some time ago, I told you about a company called Spoonrocket, which delivered “home-made” meals in under ten minutes and that Spoonrocket was a great idea, doomed to failure. A couple of months ago, I was proven correct when Spoonrocket shut down. It was not about the food.

Spoonrocket never quite got around to branching out the way they’d planned, and the company they transitioned their users to doesn’t seem to be much better off in that regard; thus far Sprig operates in San Francisco and Chicago, period. And that underscores the entire point: Spoonrocket and Sprig both seem focused on the food, and it’s not about the food.

It’s Not About The Food

As a foodie myself, saying that makes me a bit ill. Food is always about the food; I’ve experienced exemplary service and lovely ambiance in places where the food wasn’t any good and I’ll tell you what: it’s about the food. But what it isn’t about is how your food lands in front of you, so long as nothing bad is happening. You’re a vegan? You don’t like GMOs? You know about some shady side-deal a restaurateur is involved in? Run the other way; that’s fine. The problem at Spoonrocket was that they believed it was ALL about the food and they had no way to make that equation scale.

Oh, and then Postmates came along.

Postmates is amazing. If you live in a place where Postmates operates you have the option of being as lazy as you like and still being able to get food from pretty much anyone. But Postmates isn’t delivery service run by your restaurant; Postmates is a logistics service, pure and simple.

What you see, of course, is delivery and customer service, and the way Postmates bills if you close your eyes you don’t even feel like you pay for what they add to the process. And that’s the point. Postmates may sell customer service to both you and the restaurants from which you order, but what they really sell is process. It’s Not About The Food.

I’ve written almost more times than I can count about the importance of customer service. You may think you’re in the hotel business, or the restaurant business, but you aren’t; you provide customer service. That said, there comes a point where you need to ask yourself what you sell, and you’d better have a way to arrive at the correct answer. Postmates gets it. Uber gets it. Spoonrocket didn’t get it, and they’re gone.

You know what to do now, right? Because it’s not about the food.