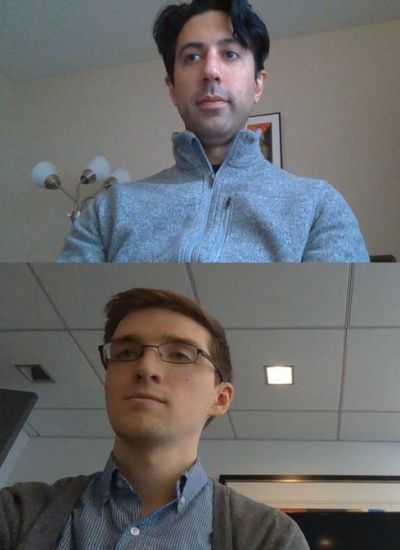 I recently found myself in the market for a new laptop computer. To be fair, there was nothing wrong with the Lenovo Yoga 2 Pro I started using a bit over three years ago; in many ways this upgrade was driven by business necessities that had nothing to do with the computer I was using.

The only thing I ever had a problem with on that computer was the strange math issues in the story I just linked. Even the battery on that Lenovo outperformed; 37 months in it’s still about 90% as efficient as it was the day it left the factory. Ever notice how quickly your phone battery loses its efficiency? You get what I’m saying; this is kind of amazing.

I had decided on a Dell XPS 13. It’s absolutely the computer-of-the-moment if you have a bit of budget and are looking for a light, all-day-battery laptop. But the XPS 13 has one serious problem. Its webcam is pretty much useless.

Because the XPS 13 has no bezels on the top (or sides), its webcam has to go underneath the screen. That would be odd enough if Dell had located it in the center of the bottom bezel, but the XPS 13’s camera is offset to the left. I played with a computer at Best Buy to see how big an impact that had on my ability to look at the screen without making whoever was on the other end of a video chat wonder why I wasn’t looking at them and concluded that it wasn’t possible. Best-case scenario? Push uncomfortably far back from the computer and sit off to the side … and your eyes will still look shifty.

The two gentlemen you see above are actually the best examples I could find of using the Dell XPS 13’s webcam. Real world, it’s way worse, and video conferencing is a whole lot more real now than it once was.

As a result, I bought an HP Spectre x360. It’s has the same size screen as my old Yoga2Pro, but in a noticeably smaller and lighter package. It’s supposed to get about twice the battery life. It’s definitely a bunch faster and I doubled my memory and storage. I’m almost happy with my decision.

As I said, the battery on the Spectre x360 is supposed to be quite a bit more powerful than my previous computer. But so far the results I’m seeing leave me skeptical on that front. Fingers crossed; the types of things I’ve used it for today might be overtaxing, power-consumption-wise. Addendum: Nope. The Spectre x360 has battery issues. I’ve returned it.

But as this article at Engadget points out, there are compromises. They’re way less important than that webcam placement issue, but compromises they are. No more SD card. No HDMI out port. Odd tweaks HP made to Windows. A charging situation that I can’t quite explain.

Compromises, one and all. The question is why?

Of course, that’s the point; compromises only work when you know why you’re making them. I knew I was buying the second-best computer available and that was OK because I wasn’t willing to accept the laptop camera compromise. As long as I figure out how to improve battery life all of the other issues are small and have acceptable workarounds. Business change is like that.

Managing compromise really is the hardest part of effecting good business change. And seriously, had Dell centered the webcam on the XPS 13 it would have been fine. Pretty obvious, right? There was simply no reason for the laptop camera compromise!

Or am I missing something? Are you?