VideoConferencing Gets Real with Chromebase 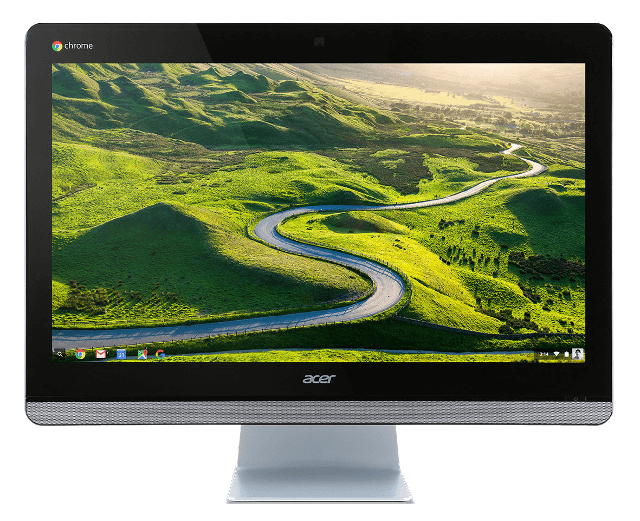 Ever found yourself thinking “it’s time videoconferencing gets real”? It just did.

The picture you see here is of a new Chrome-based computer from Google and Acer. The Chromebase 24 is an all-in-one, touch-enabled desk-or-wall-mountable computer that’s been optimized for videoconferencing. And that doesn’t mean what you think it does.

Sure, the Chromebase 24 has a high-definition webcam built in, along with a microphone array and pretty decent speakers. And the screen is superb, and boasts 1080P resolution. But what’s amazing about the Chromebase 24 and the reason it’s the first real embodiment of “it’s time videoconferencing gets real” is that it does nothing else, and isn’t free.

Oh, and that it’s from Google.

I have a Chromebase sitting on my desk. It connects me, almost directly, to the client I now spend a bunch of time taking care of in Birmingham, Alabama. We installed the Chromebase units less because we needed them—we’re doing fine on the phone, through apps, and with my monthly visits—than because one of my clients’ businesses is tied in with public video terminals and it turns out that Google is trying to get into that space. Yes, I just said we’re competing with Google and have bought their products to help fight that battle. Oh: and more importantly we’ve purchased Google’s services.

This week we did extensive testing of the Chromebase, and I broke out my old Computer Answer Guy moves to dissect how a Chromebase really works. Videoconferencing Gets Real? Yessir, yes it does.

When Videoconferencing Gets Real

Over the years, I’ve written about video calling a few times, and have generally been kinda down on the idea. Sure, it’s a nice thing to be able to do, but there are real etiquette problems with ad-hoc video calling, and genuine video conferencing has problems unless you take great pains to control every part of the process. Ever been in a conference room watching choppy video on a big, wall-mounted screen over a Skype connection? Google’s Chromebase is not that.

While a Chromebase can be used as a not-quite-regular Chromebook (Ctrl-Alt-S at power-up will bypass the managed videoconferencing features in a Chromebase), the point of these is that you need at least two of them, they need to be assigned to the same domain, and that domain needs to subscribe to Google for Work. Two of our companies used Google For Work, with its requisite $5-per-month-per-email-address charge. Google for Work makes Google your email server, and in theory gives you better versions of many of Google’s normally-free services, like Gmail, Google Drive, and Google Hangouts—the otherwise-free tool built into the Chromebase.

It’s only because we’ve already drunk the Google Kool-Aid that we were eligible to buy the Chromebase units and pay Google a $250 per year management fee per device. And this is where videoconferencing gets real.

That fee for management of a Chromebase seems like a bit much, especially considering you’re slightly overpaying for a middle-of-the-road desktop computer and then responsible for paying almost fifty percent of its price every year to keep it running. And as I mentioned above the Chromebase isn’t a normal ChromeOS computer, like a Chromebook; you can’t log in at the machine level, meaning that if you want access to your Google services you need to bypass the videoconferencing feature when you boot the device, start as a guest user, and then manually log into Chrome.

In practical terms, this makes the Chromebase only useful as a portable-enough videoconferencing rig, albeit one that looks and sounds great and is entirely self-contained; remember, the Chromebase has a touch screen, so you don’t really need its mouse or keyboard. Drop it on a desk, get on a WiFi network, and connecting to another Chromebase is as simple as tapping the name of a Google Hangouts session. But Google Hangouts is free; why would you want to overpay for a computer, pay for Gmail, and then be on the hook for a yearly ransom?

Because the Chromebase is the first time you’ve ever seen videoconferencing get real, and the easy-as-can-be part of using a Chromebase isn’t even the point.

That tied-into-the-Google-infrastructure-and-paying-quite-a-bit-for-the-privilege thing is actually why videoconferencing gets real with Chromebase. What you don’t see happening is that Google, by controlling your domain, limiting your connectivity to only the other members of it, and having you use a device that they control from the moment your connection hits the Internet until it reaches another Chromebase, is providing a system closed off from the vagaries of the Internet. Have you ever used a traceroute tool to see how many stopping off points your computer’s Internet connection makes between you and whatever website you’re visiting? It’s almost never fewer than a dozen hops.

With Chromebase, you go from your Internet provider directly to a Google video server, which then connects directly to the other Chromebases you’re talking to. Two Hops, With Only a Video Server In Between. And Google is running that server. In other words, Chromebase lets you use Google’s servers and conditioned bandwidth in a nearly-closed environment; the only way you could make this any better would be if Google was your ISP.

Is that worth all of the rules and costs? If you’re interested in Videoconferencing, it sure is. Google’s Chromebase takes simplification of the videoconferencing gets real conundrum to where it needs to be. Does this make videoconfereencing a substitute for real contact with real people? Of course not. But here’s the thing: for the first time paying Google for Chromebases and their management makes interfacing with far-flung contacts almost as easy as walking into a room.