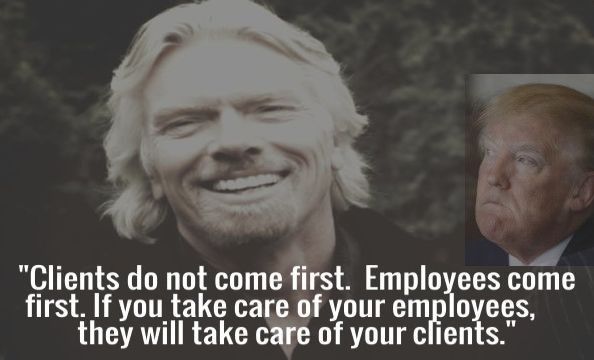 In all the years we’ve been putting out business process and business change content, Richard Branson’s only come up here once—and not for anything good. But Sir Richard has a long history of doing business the right way and taking care of his people. So his well-known position that employees come first is no surprise.

Donald Trump, despite a reputation for great loyalty, isn’t known for being that nice to his employees. In Trumpishness, employees very likely take the form of human resources. Well, despite the often-interchangeable word use, employees and personnel are NOT “human resources”. People are People, deserving of better treatment than desks.

Very little of what I’ve written about Donald Trump has been positive. But our present Commander-in-Chief has managed to craft one new executive order that may make sense. The H-1B Visa program is in for a shaking-up.

Employees come first is pretty obvious. Pulling an example from my recent past, I think of a client I worked with for most of 2016. I filled his CEO role, commuting regularly to Birmingham Alabama. The first thing I did was make it clear that the new boss from NYC had everyone’s backs. In fact, before I set to work turning around the other problems this client had I spend a solid couple of months realigning the team, making sure everyone was not only clear on their job roles, but happy with them.

It was a strong play, and slowed down some of the other things I was there to do. Is postponing the reorganization of finances and company focus a safe play? Often, no. But if your employees don’t know what their jobs are and whether they’ll still have them tomorrow, nothing else matters. They’ll under-perform, and it will bleed into every corner of your business.

Notice that I phrased that as “whether” their jobs are safe, and not “that” they are. Jobs aren’t safe, and once employees think they are, they’ll underperform pretty much everywhere. Still, employees come first. Your employees need to know where they stand.

One of the things we took advantage of in Birmingham was competitive price advantage. Our labor force there simply cost less than equivalent employees cost in bigger cities. We knew it. Our employees knew it. And when we sold services we made sure our out-of-market customers knew it, too. It became both a way to win business and make clear that our employees’ well-being was on our minds.

It also served to keep our employees aware of their roles, value, and what was expected of them.

That last sentence may sound controlling and harsh, and in some ways it is. But regardless of motives, it’s also a way of working through “employees come first”. People like knowing where they stand, even when their standing is tenuous.

The H-1B Visa program controls the way American companies recruit foreign employees. It helps with situations where specialized talent is in short supply. It also helps with costs; imported talent often costs less than highly-educated Americans do. But look back just a few words; people like knowing where they stand. Even if protectionism/nationalism/populism has problems, the specter of never having a real shot at jobs earmarked for foreign talent creates a rift in the idea that employees come first.

Yes, I just said something nice about Donald Trump.

You probably shouldn’t get used to that. But the idea that we should look closer for resources before we automatically look further has merit. And Trump’s plan to alter the H-1B Visa program won’t eliminate foreign workers with special skills. It will flatten out the playing field. It will give people who would otherwise be systematically overlooked a shot at good jobs.

Then, of course, it becomes the responsibility of all parties to make sure “employees come first” works out. But that’s a topic for another day.

The eye of the storm isn’t always a safe or comfortable place. But that too is for another time. Right now, let’s talk about how we get your business running the way you want.