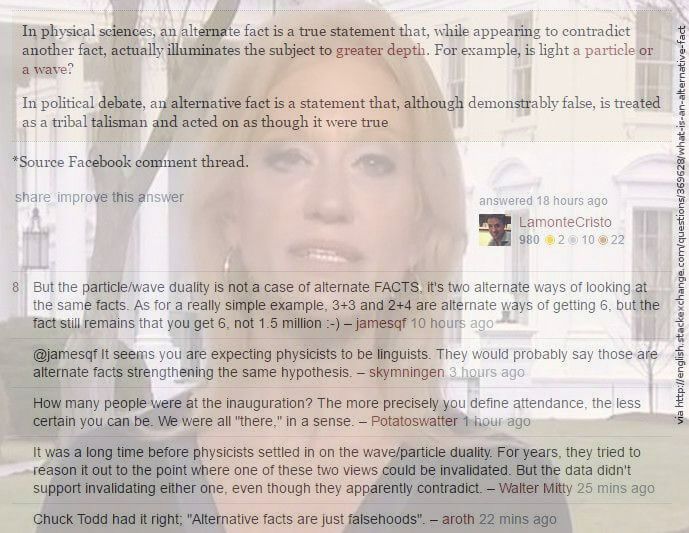 The key here is that word “alternative”. Have you got any idea what it means—and when? Take a look at this, from StackExchange:

This is very likely an example of me being too pragmatic. We all know what Ms. Conway meant, that Mr. Spicer knew his facts about crowd sizes were wrong, and most important that the entire conversation is ridiculous.

If you believe in Freedom of Press, the silliness currently playing out in The White House is huge. The very idea that the leader of the free world wants to control the press narrative in this way is frightening. But play out it will, and I believe that if journalistic standards hold, everything will resolve acceptably. The problems that matter here—as well as in business—arise when standards change.

And change they do.

Sometimes changes are evolutionary, while other times environment forces them along unnaturally—and too quickly. In terms of business change, while “content marketing” is what everyone is trying to do, almost no-one understands what the idea really means. Sure, we all get that content marketing means “publishing information to use as bait”, but … then what? Be honest: most days your content marketing sucks, right?

Leave the journalism to the journalists; they’ll be fine. Here in the real world, there’s a growing problem getting eyeballs and attention, and pretty much everyone is trying to get you to help them. Guest blogging, a quaint idea I espoused all the way back in 1997, is dead—or should be. It’s escalated to something way more insidious, and harder to understand.

Simplistically, we can understand why movie studios are secretly OK with you pirating films. And I’ve mentioned many times that you need to publish your own stuff on your own site. But the game is getting more complicated. Twitter didn’t ease the 140-character limit out of the goodness of its heart, you know.

The issue is that the facts—and there are many—are becoming harder to discern. Just as with the Trump/Conway/Spicer reality distortion field on Alternative Press Vs Alternative Facts, “publishing platforms” are now hiding their intent.

Recently, this article showed up at Quartz, talking about What Medium Needs To Do To Survive. It was interesting and put forth several ideas that make sense in various ways:

That last point was never made directly, but the story ended with a link to an article that implied you’d get a better deal from Quartz than from Medium. Except, of course, that Quartz will likely start doing that double-charge thing they’ve tried to goad Medium into, and—oh yeah—nobody is actually helping you by “letting you publish” on their site.

And getting this stuff right is now mission-critical to all businesses.

Guiding you through this minefield is what we do here, so feel free to contact me. Or if you’re speaking to Sean Spicer point him over here, too 😉

Regardless: please make sure you’re paying attention to where you live on the Alternative Press vs Alternative Facts foodchain. Because… uh-oh … like it or not, you’re a journalist.