Dictators Use Twitter. And … It Works Best If You Are One.

I’m neither a famous actor/celebrity type nor a dictator (although my kids might argue with the second half of that statement). But I use Twitter, and by now I hope you do, as well. There’s really no more effective way for a business to stay in touch with its customers, and thus bring about business change in a constantly evolving world.

Hugo Chavez, the dictator president of Venezuela, agrees. Mr. Chavez turned on his Twitter account less than two weeks ago, and is already has the most-followed account in his country.

This shouldn’t come as a surprise, and given Venezuela’s small size the fact that Hugo Chavez sits at number one with only a couple of hundred thousand followers shouldn’t come as too much of a shock, either. And never mind the ridiculous number of followers that a B-movie actor like Ashton Kutcher or a celebutante like Kim Kardashian can rack up.

Hugo Chavez has found his world. If you like we’ll help you find yours. But please: if you don’t already have a strategy for social media and social networking, create one. Now.

It’s less than 48 hours since this posting went live, and while looking at the traffic reports for answerguy.com I notice that we’ve become Google’s second most important site for the search term “what works well in a dictator“. 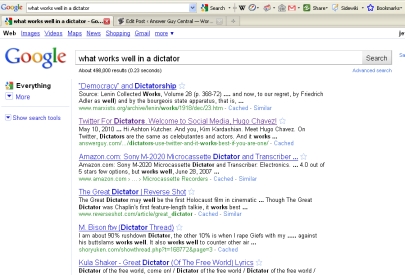 If you still aren’t sure about the importance of search engine optimization, this should seal it for you.

Now of course, I don’t care about ranking high for the word “dictator”, or more specifically the word dictator in the context of that phrase. But because we drink our own SEO Kool-Aid, we’re there, and we got there fast.

Thank you Hugo Chavez, dictator President of Venezuela. And thank you, Twitter.