Have you ever had a customer service representative, immediately after doing the opposite, speak the words “I hope I’ve provide you outstanding customer service today” as your contact with them ended?

Of course you have. Not actually providing customer service and calling it customer service seems to have become the standard in that endeavor. And that’s a problem. When your customers expect something and you provide something else, you’re sabotaging your business.

Before I begin this rant, let’s be clear that if your customer leads himself to believe something that you haven’t offered, it isn’t your fault. At that point customer service can consist of salving your customer’s wounds. But when you state your intentions, fail to follow up on them, and smile, you’ve misaligned your expectations and your customer’s. It’s the opposite of customer service. You’d be better off saying “buy something from me, and then you’re on your own”; it’ll save time and end up in the same place.

What did work, though, was that I could pair the Motorola S305 with my Droid SmartPhone. And when I did that I discovered something very cool: If I was playing music on my Droid and a phone call came in, the music would pause until the call ended and then the music would resume. Nice!

If I want to use my Droid as a music player, that’s the end of the conversation. It’s also the end of my iPod. But that isn’t what I want. I want my iPod to be my music device and my Droid to be my phone. Lo and behold, there are instructions in the S305 User Guide that explain exactly how to make that happen: 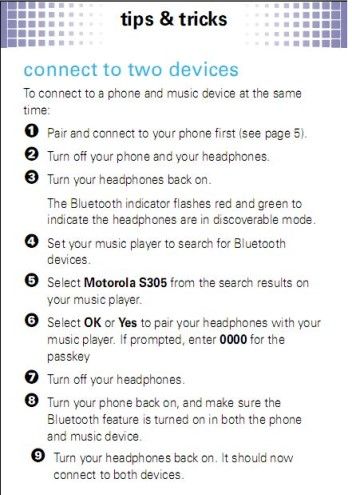 Problem is, although I followed them precisely, those instructions don’t work.

I contacted Motorola Customer Service to ask if I was missing something, and if there was some way to make both my iPod and my Droid work with the S305 , and was told that while the S305 could be paired with two devices simultaneously, it could only work with one at a time.

Which isn’t what those instructions say, is it?

In fact, it’s the opposite of what the Motorola S305 instructions say. Which is bad; my expectations for the product were mis-set. And the customer service representative’s response when I pointed that out? “I hope I’ve provided you with outstanding customer service“.

He could have offered me a refund. Or an exchange. Or a coupon. Or anything. Instead he offered me an insult. That’s Customer DIS-Service.

And it started with a manual that’s just…plain…wrong.

Writing technical guides is tricky. We understand that; it’s one of the things we do at Virtual VIP. But making good on your own promises, particularly when you’re a company the size of Motorola and dealing with a customer who’s having a problem with a sub-$100 item is easy. Just do something more than blow the customer off the phone and call it customer service. In other words: for great customer service, just try honesty.