Statistics: The “Half-Life” of an Internet Link

I’ve just come across an absolutely fascinating piece of research by a scientist at Bit.ly, the link-shortening service. It discusses the length of life of links on the Internet. It makes for some seriously interesting reading.

But it misses the point. Here’s part of it: 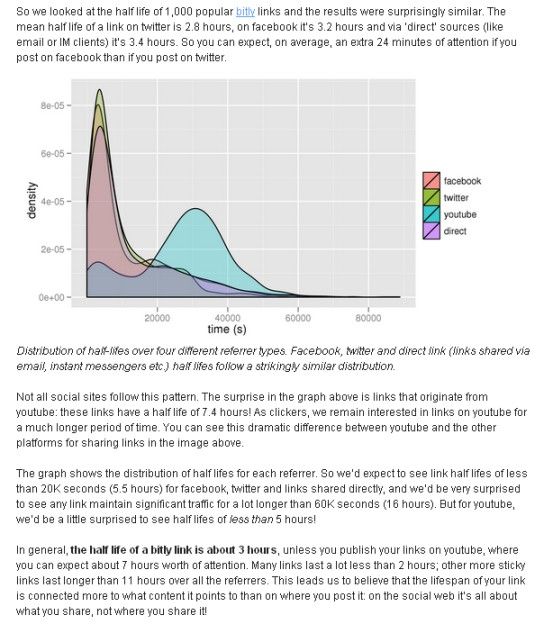 Like I said, fascinating. And in a broad sense certainly in line with something I told you a year ago: most tweets are completely ignored. Also, a great source of backup for people who say that video is the right way to attract more traffic (I’ll stick to my assertion that creating video isn’t worth the effort and expense for most businesses, though).

But Bit.ly’s statistics aren’t actually “correct”. In fact, as much as I enjoyed reading the piece that Bit.ly’s science team wrote to explain their findings, what it made me think of was something I’ve told you about statistics.

Bit.ly’s research speaks about the half-life of Internet links, and if you read it you’ll find a lively discussion on the definition of half-life. And that’s where it breaks down, because on the Internet, half-life, like many other real-world things, takes on a new meaning.

As proof, I look at the number of hits we receive at Answer Guy Central. Here’s the just-did-it-now traffic graph of a piece I wrote on February 24, 2010,  against this story on Yelp and Extortion:

Look at the graph and you’ll see that by last July we had what appears to be zero traffic “left”. But in December the piece started bringing traffic again, and hasn’t stopped since. And the numbers are such that had we run the half-life numbers when the piece looked dead they simply would have been wrong.

Please hear me when I say that I understand that traffic to the page doesn’t mean that the links I originally seeded around the internet are drawing traffic now, post-“zero point”. No doubt new links have popped up, and they’re contributing to the traffic. But those original links ARE GETTING CLICKED.

So Bit.ly’s research may be “correct”, but it’s not meaningful in any context other than their own self-promoting one. Again, Statistics Lie.

Here’s my assertion, and sure, it’s also self-promoting; I want you to hire us to do your Search Engine Optimization:

If you aren’t getting serious about Long-Tail Marketing, you’re in trouble.

Word of mouth is still best, and if you can get your customers to evangelize for you, that’s great. But long-tail marketing is how, over time, you get the Internet to be your evangelist.

And if you do it correctly there’s no half-life on that.