Statistics Lie. Are You Listening, Hubspot and Shareaholic? 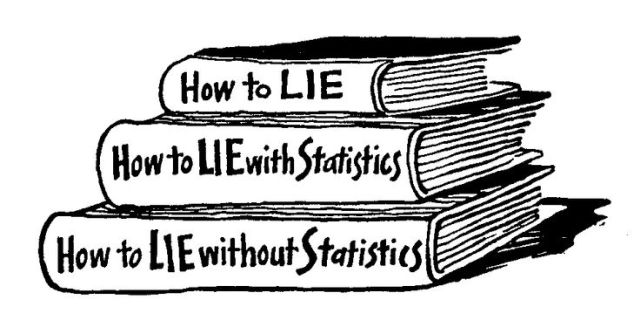 I’ll bet you have a few things that are always on your mind as you move through your day. Me too. One is something I’ve mentioned before: Statistics Lie.

It’s like the conversation about “Perception is Reality“. Except that in the case of statistics, the goal is to intentionally manipulate the perception that other people have of realities surrounding your stories. Reality doesn’t develop as a result of perception, it’s manipulated.

I thought about this today when I was looking at the statistics provided by Shareaholic about how often readers here send what they find to other places. Shareaholic is the company that helps put all those little icons at the bottom of the posts in Answer Guy Central Changes, and they let me see how often you share our work—and where.

Here’s another example of how statistics lie:

It all sounds pretty impressive, doesn’t it? I hope so, because Perception is Reality.

But here’s an alternate perception of the same reality: 61 engagements via Shareaholic is pretty lame when you compare it to 6,000 (that guy at the top is 100 times better than we are) and while being in the top 3.84% of all web sites sounds great, the fact that almost 1.2 million sites get more traffic that we do is pretty awful—especially when you consider that the site reporting that statistic to Hubspot doesn’t bother keeping details on any sites outside the first 100,000.

Then, there’s the centrist position: based on the statistics we gather ourselves and those being reported to us by Hubspot and Shareaholic, I’m pleased with the results we see from our marketing efforts. We do this all using long-tail marketing techniques and Search Engine Optimization, using the same successful marketing techniques we apply for our clients.

So am I saying that you should ignore or mistrust what Shareaholic tells you, or what comes out of Hubspot’s tools? No. We use Shareaholic because it gives our readers an option to be social, and we’re planning to keep using Shareaholic. And while we don’t use and generally recommend against Hubspot, we believe that the information they provide has value.

Just remember that statistics lie. And THAT perception is everybody’s reality.