QR Codes Turn Out To Be Useful! (If You’re Drunk) 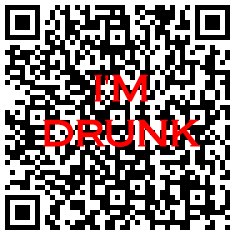 If you’re drunk in a bar in Michigan this Saint Patrick’s Day and you see this QR Code on a coaster, go ahead and scan it. Maybe a ride will show up.

Despite the “I’m Drunk” caption, the QR Code you see above will bring you to a page describing Search Engine Optimization at Answer Guy Central. Whip out your smartphone and scan that QR Code to see.

But if you’re in Michigan this St. Patrick’s Day, in a bar participating in this program, have a SmartPhone with QR Code scanning software, and are sober enough to use that QR scanner but are too drunk to drive, you’re in luck. Look through your beer goggles at the coaster sitting under your drink and you’ll see a QR Code that will summon a taxi cab.

Is this yet another case of a technology looking for a reason to exist?

If you think about all those “ifs”, then yes, it is. I’m having a hard time believing that all the stipulations I pointed out above will align in a way to make Michigan’s Drunk QR Code Usage Program terribly useful—although as anti-drinking-and-driving advocates would point out,  if a program like this saves just one life it’s worthwhile.

As a business and technology consultant, though, I see the first example of a useful application for QR Codes, maybe ever. As I pointed out a year ago, QR Codes are a solution in search of a problem. At least NFC has a practical—if not yet ready—application; QR Codes, right up until they were used to get a drunk a ride, had no value at all.

Let’s remember: anything new that you create needs to have a purpose. Those goals can expand over time, such as Shazam!, previously just a cool way to identify music, becoming much more. That’s business change. And I think we can admire the folks in Michigan who created this one, even if the SmartPhone-wielding Drunks and these QR Codes never really align.

If you want to talk Business Strategy, you can reach me here. Just don’t bring me a green beer.