Influency Tool? A Refrigerator. Object of Influency: You. 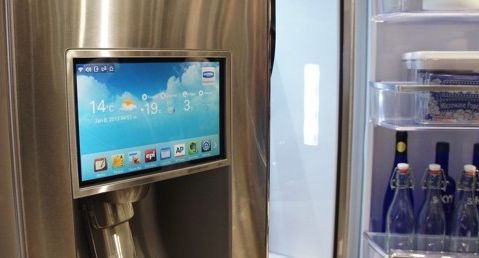 Last week at the huge consumer trade show CES, Samsung introduced a refrigerator with a touchscreen and Internet access. And as dumb as that sounds, there’s one small tweak that makes it anything but.

The Samsung T9000. Now with Influency* baked right in.

Appliances with Internet connectivity aren’t a new idea, and they’ve been showing up—and making most people scratch their heads in confusion—for a couple of years now. Mostly, they’ve felt like a solution in search of a problem.And as much as I’d like to like the idea of scanners in my refrigerator watching inventory and talking to the scanners in my cabinets doing the same to create an always-ready shopping list or even to automatically order the things I like as I run out of them, there are too many pieces that don’t really fit together properly for that puzzle to form a good shape.

Baby steps, people, baby steps.What different amount the new Samsung Internet Refrigerator is that it’s got something built in that actually makes it useful, and it’s a tool you’re probably using for other things.

The Samsung T9000 has Evernote.

I’ve mentioned Evernote before. It’s one of the most useful tools in your computing, communication, and Influency* arsenal, and probably the best example of what’s great about cloud computing that we’ve seen to date. I use Evernote to keep track of the random thoughts I try to keep pulled together to get through both my professional and personal lives. One of my children had it mandated at school as a tool to be used. Evernote just works, and it works both because it’s simple, and because it’s everywhere.

Evernote is in each of my computers. Windows, Mac, Linux, Chromebook; it doesn’t matter.It’s in my Galaxy Nexus SmartPhone and my Nexus 7 Tablet. And each time I write a note to myself or someone else using Evernote in any of my devices it automatically lands in all the others.

Why not have that in my refrigerator?

Sure, that’s overkill in a lot of ways; if I’m standing in front of my refrigerator and something Evernote-worthy occurs to me I can probably find a device to take a note in before the thought slips away.But here’s where Evernote in your refrigerator makes sense: my fiancée can update the shopping list I’ve always had her text me when she notices we need something, right as it occurs to her.No fuss, no muss, no thought, no “you didn’t tell me that”; the list gets updated and pushed to my phone automatically. For that matter I can do that with myself.

Influency is about having what you want when you want it—or more to the point, creating an environment in which others have what they want when they want it, and making that thing they want you.

And Influency* is what we do here. If you want to talk about how The Answer Guy can create Influency for you, Contact me here. Maybe you can even do it from your refrigerator.