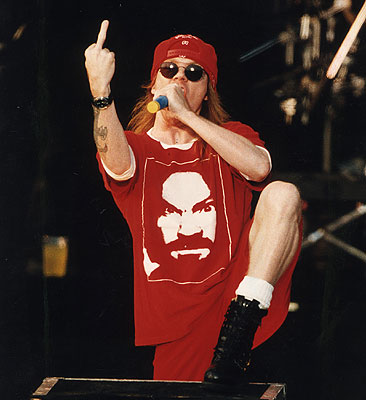 Axl Rose is my favorite SEO client. Or the Guns N’ Roses front-man would be my favorite client if we were doing his Search Engine Optimization.

I’ve mentioned Mr. Rose before. I wrote a whole post about the idea of Axl Rose as a business change agent about a year ago, and then a few days later showed off our SEO skills with this post about Axl Rose, Mick Jagger, and The Grateful Dead. Take a look: our SEO Rankings were pretty impressive.

We’re still ranked pretty well for Jagger. The Grateful Dead, by virtue of how great they were at marketing and business, are slightly more difficult to optimize for. And of course, we haven’t really gone after any of these guys too hard—we only use Axl, Mick, and Jerry’s Boys as proof of concept. This morning, we’re in the toilet for Axl Rose, because as I told you yesterday, Google is pretty smart.

Oh. And because Axl Rose is a jackass.

Guns N’ Roses is going in. Axl’s former friends are going in as members of Guns N’ Roses. Axl Rose is a jackass.

Why am I telling you about something as banal as Axl Rose’s famously large ego?

First, because I want to make sure that after the hubbub dies down we reclaim the #1 ranking we enjoyed until yesterday for the search phrase “axl rose business”. And we will. Just watch.

Second, because I came across this piece on marketing and writing today and wanted to make a point that matters to anyone’s long tail marketing efforts. A lot of effort goes into search engine optimization, and you can make your life easier (or lessen the costs for hiring SEO Consultants like us) if you just write from what you know.

Friends and clients ask me all the time how I manage to come up with something to write about five times each week, and the secret is that simple. I write about the things I’m passionate about, and I keep track of my ideas for articles using cloud-based tools.

So I don’t care about Axl Rose’s ego or how it drives him to make stupid decisions. But it’s a newsworthy story today; I noticed, and found a way to tie it into my business change objectives.

And Axl, if you’re reading this: You Could Be Mine.  😉