Now you have it . . . and now you don’t. Facebook is a publicly traded company. Mark Zuckerberg and a few of his close pals are officially gazillionaires. You, sadly, are not.

The stock market is fixed. No, I’m not saying that the game is dirty or being run by cheaters (although . . . ), but that very smart people being guided by well-programmed computers know how much of what’s going to happen will go down long before it ever does.

Ever wonder how insurance companies make money? They know ahead of time how much they’re likely to pay out against the money they take in. Casinos work the same way; the odds are set in their favor and they know how much money they’re going to make even before people sit down at their gaming tables.

So goes the stock market. 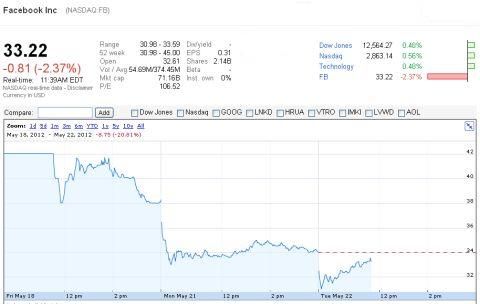 If you weren’t a Facebook insider or venture capitalist, and weren’t one of the people who took money outside the USA to buy Facebook stock a year ago, you got your first shot at owning a piece of Zuckerberg and Company last week. If you happened to grab your Facebook stock at the IPO price of $38 you probably thought you had gotten lucky. And when you saw Facebook trading at just over $30 this morning and had lost 21% of your investment you started feeling a lot less lucky.

The word that matters here is “luck”. And the comparison to casinos above isn’t a coincidence; in large part the stock market is about getting lucky. But luck isn’t the topic of this piece.

This piece is about negotiation, and the business change you can create by knowing how to negotiate and what tools you’re negotiating with. Barack Obama is the best negotiator of all time. And the Facebook guys used every tool at their disposal to negotiate the deal that made Facebook a public company.

In short, Facebook saw to it that they left no money on the table, because Facebook is . . . well, they’re Facebook. They knew that they could negotiate a deal that few other companies could get away with and Facebook used that knowledge to beat extra money out of Morgan Stanley and their other underwriters. It’s been suggested that somehow this makes Facebook evil. It doesn’t. Why should the people who own Facebook sell it for one penny less than they can get for it?

When America On Line went public, I was enough of an insider to get some stock at the IPO price. When I sold that stock at a nice profit, I did so in several blocks spaced over a few minutes, pushing the price I got for the last shares a bit higher than those I sold first. I knew how the market worked and was in a position to take advantage of that. It’s called business.

Mr. Hoodiegate was in nearly-undisputed control of the hottest stock offering in years. I believe Mark Zuckerberg has too much control over Facebook and is the wrong guy to lead it moving forward, but he’s very, very smart and I’m less and less inclined to make the issue one of his being too young.

Facebook is overvalued, even at $30 per share. But the market is likely to keep it at higher levels than that for a few months, and maybe even a few years, so if I was still a stock adviser I’d probably suggest that my clients buy Facebook stock.

But speculation isn’t our business. If you’d like to talk about what my not-a-young-guy business position can do for your business, all you need to do is contact me here.