Verizon Has Made My Head—And Likely YOUR Wallet—Hurt. A LOT

Guess again. If you’re a Verizon Wireless customer, your prices, under the guise of Verizon Wireless making plans that are theoretically less expensive, just went up. WAY up. If we hadn’t already christened The Verizon Wireless Customer Service Wall of Shame for them, this sleight of hand would have been enough to earn Big Red that honor.

Let me be clear that if you’re willing to use lesser or alternative carriers for your wireless data needs there are still options. Clearwire, for example, sells unlimited 4G data at decent prices. But if you want unlimited data and a phone number attached directly to your device, the options are dwindling fast.

Yes, there was a pitch in there; we’ll set you up with a phone number and “a plan” if you don’t know how to pull that off yourself.

Assuming you’re planning to stay with a traditional wireless carrier, though, Verizon just changed your life. Here’s where my head starts to hurt.

Verizon Wireless has announced their new “Share Everything” Plans (we’ve archived the document here for posterity’s sake). And if you and everyone in your family are primarily telephone-call-and-text users, you’ll actually be able to save money on Share Everything; under Share Everything, four users get unlimited phone calls and texts plus 1 Gigabyte of data for about $200 per month.

Pause. Read that last sentence again. On Share Everything you get ONE GIGABYTE OF DATA.

Here’s my wireless data usage for just one week. One Week. One Person. More than One Gigabyte: 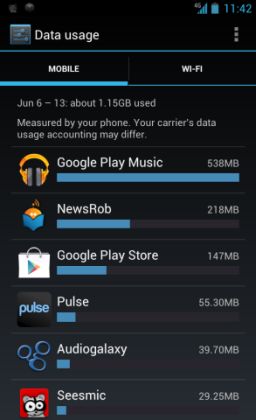 If I eliminate Google Music (streamed music at the gym), NewsRob (news feeds and their accompanying pictures) and if I only allowed App updates on WiFi, over the course of a month I’d still have a data overage problem. And that’s just me, and already working way too hard to manage the way I use my phone.

And I know how. Under Verizon Wireless’ Share Everything, SmartPhones just entered the realm of Computers Are Too Hard.

I’d like to double back and give Verizon credit for seeing the business change writing on the wall and responding appropriately to both people’s objection to paying a ridiculous amount of money for text messages and acknowledging that neither text nor voice calls are inherently special in a data-driven, everything-is-really-just-a-series-of-zeroes-and-ones world. But Verizon isn’t where my concern lies; I’m interested in how you’re going to respond to your mobile phone bill going up dramatically, getting even worse over time, and you not knowing what to do about it.

Once again, you can contact me if you want help.