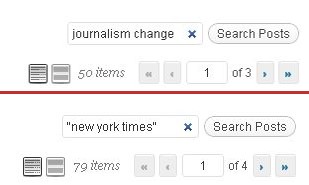 The Gadgetwise piece disturbed me on a few levels, and I commented:

Not only has this feature been available in Android since the release of the Galaxy Nexus EIGHT MONTHS ago, but the reason Google warns about its relative lack of security has both been talked about (a lot) and should be obvious to anyone who tries it out.

All the facial recognition feature in Android unlock does is check for the SHAPE of your head. Mustaches don’t matter unless they are of the handlebar variety. Beards don’t matter if they are close-trimmed. Eye shape? Nose shape? Meaningless.

In fact, I went further, asking out loud how the author got a gig writing for The New York Times. This piece was everything bad that blogging (as opposed to journalism) is so often made out to be.

I checked this morning, and was surprised to see how often I mention “New York Times” here; I invoke The Old Grey Lady’s name even more than journalism change (i.e., one of my favorite forms of business change).

I’m wondering whether The New York Times is slipping to a point where they don’t deserve to be quoted so often.

Blogging and Journalism are close enough in their intent that either can be mistaken for the other. Journalists often bristle at that assessment, as much to protect their status and avoid business change as for any other reason, and bloggers either believe there is no difference between what they do and journalism, or don’t care.

When we examine The New York Times, we’re not talking Gizmodo, an on-line publication put out by a mostly-self-promotional megalomaniac and willing to publish stories promoting arrogant felonious conduct. Blogger-turned-venture-capitalist MG Siegler is not under discussion. And speaking of Siegler, this isn’t even a commentary on huge blog network and content farm The Huffington Post and its untrustworthiness as a source of journalism; we’re talking about THE NEW YORK TIMES. The New York Times owes us a higher level of wordsmithing.

Flipboard is changing the way news is consumed. The New York Times is moving—and necessarily so—with those changes, but The Times’ content needs to stay pristine. For The New York Times, half-baked reviews are a very bad idea. NYT would never allow a conflict of interest to corrupt their journalistic position, and I’m certain that Times employees have contractual clauses that say so.

In short, allowing garbage like yesterday’s Gadgetwise post by Roy Furchgott to run—and I imagine the rationale is “we don’t edit our blogs”—dilutes the value of the rest of The New York Times’ content.

Treating your established brand like a blog-network-come-lately is dangerous. It’s the kind of business change that leads to the creation of content-without-a-purpose properties like The Daily—which by the way is rumored to be close to shutting down.

Dear Editors of The New York Times: run drivel like the Gadgetwise piece on Android facial recognition and all you’re accomplishing is an example of Your Lips Move, But It’s Too Hard To Hear What You’re Saying.