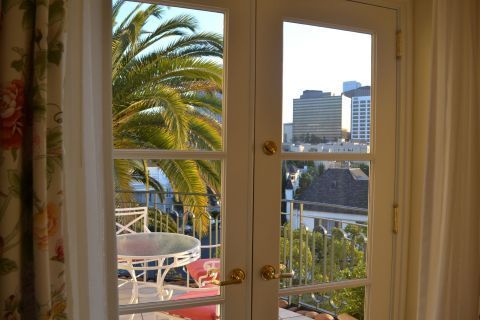 This week, I’m in Los Angeles, attending the West Coast Memorial at UCLA for Dr. Barbara Yablon Maida. As I encounter more and more people with similar opinions of and feelings about my sister, it’s no surprise that I find myself thinking about perception and reality, but yesterday, as happens so many times, I found myself thinking about customer service, too.

You’re wondering what that has to do with fake boobs, aren’t you? Patience, please . . .

We’re staying this week at the Peninsula Hotel in Beverly Hills. It’s fabulous, with beautiful rooms and facilities, and impeccable service, at the same level as The Lanesborough in London. The suite we’re in is huge, and features a balcony overlooking Los Angeles; you can see it, above.

We didn’t pay for quite this. When we checked in, The Peninsula Beverly Hills upgraded us—twice. The staff at The Peninsula gave us the first upgrade because they had it available, and the second because there was a minor issue in the first room they upgraded us to. And yes, of course that’s a “customer service done right” story.

But aside from wanting to say nice things about the Peninsula Beverly Hills because they deserve it, the customer service story here is about fake boobs, or at least perception and reality when fake boobs are under discussion.

Yesterday afternoon, poolside, we saw a young woman gesturing at and speaking about her breasts to another young woman. At least we assume the woman was young. Her friend was, and so was the third person in their party, a man. The friend and the male person looked very similar; my guess was that they were brother and sister. The girl so enamored of her own chest looked entirely different, and we assumed (perception . . . reality . . . ) that she was talking so much about her breasts because they were in fact boobs of the fake variety and they had just been . . . done.

These fake boobs weren’t large, and in trying to figure out the dynamic and relationship between these three young people we found ourselves wondering why such a young person would have small fake boobs implanted. Better, who had decided she needed them, and who had paid?

Maybe, I suggested, she was stepmother to these other two people, who were of similar age to herself. It would explain a lot, and was an explanation that enabled me to wrap up boobiegate in a neat ribbon.

But maybe I was trying to do that because, faced with a situation that didn’t make sense to me, I needed to create a reality to match my already-skewed perception.

That’s what customer service is all about. You make people happy by creating the perception that everything is perfect, and in creating that perception, it becomes reality.

By the way, let me compliment the folks here at The Peninsula Beverly Hills one more time: this weekend is my partner’s and my fifth anniversary. She and I mentioned that because we were asked what our visit was about, how long we were staying, and why we would leave so soon, and we disclosed some information. Here’s what we found upon returning to our suite last night after dinner: 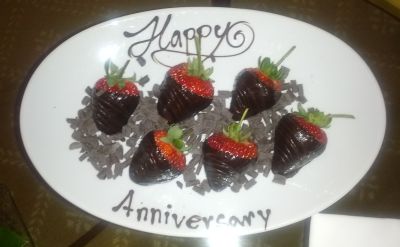