This morning, I opened up LinkedIn to look at my profile.

Actually, that was “step two”. I received a message from LinkedIn this morning telling me that someone I used to work with had endorsed me as an expert in Lead Generation. I was surprised that this had happened and clicked through to LinkedIn to investigate. When I got to LinkedIn, I found this: 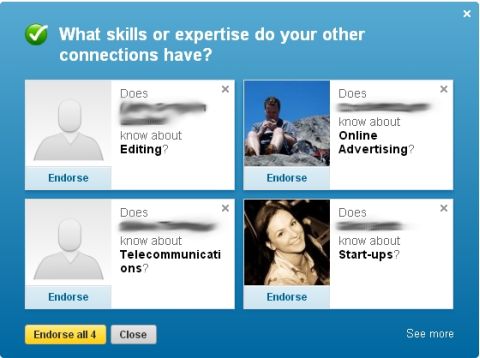 It’s an attractive presentation, and in it LinkedIn is making it very easy to do what is being quite clearly illustrated. Endorse/recommend the people you know as experts in the fields for which they claim expertise. It’s a no-brainer!

You might think I’m going to go all snarky now and tell you why you should run away screaming from this new feature in LinkedIn. I’m not. It was a little weird to see this pop up, but the truth is that if you pay attention, near-automatic endorsements of the people you know on social networks is actually the kind of feature that makes sense—and makes social networks social.

If you’re like most people I speak with, you’ve thought about this, just from a different perspective: Facebook is useless as a social networking tool; the world’s social networking behemoth is completely anti-social because by throwing everything against a big virtual wall Facebook renders almost everything uninteresting, and non-personal. The only time you see information is if it happens to cross your eyes when you look at your Facebook NewsFeed, or if you look at the profile/Timeline of a friend. Business-connection focused LinkedIn, like the Doctor-centric Doximity, makes more sense because it’s designed to help you do specific things with specific groups of people.

I do think LinkedIn has been a bit too aggressive in the way they’ve rolled out their endorsement and recommendation feature. The four people LinkedIn had me endorse above weren’t the original four I saw, and when I deleted one, another popped up. When I got to this group, where I was willing to endorse all four and said so, four more popped up. Nevertheless, this really does further the business change goals of both LinkedIn and its members.

I also found it amusing that the guy I mentioned in this piece on social networking enemies showed up in my slate of folks to be recommended. Of course, LinkedIn doesn’t know how I feel about my individual contacts, do they?

For you, the trick to handling this stuff starts with simply paying attention to what you do on-line. And of course, if you want help managing the process, you can always contact me here.