I Dream of Jeannie Vs. Nate Silver’s Election Day Statistics 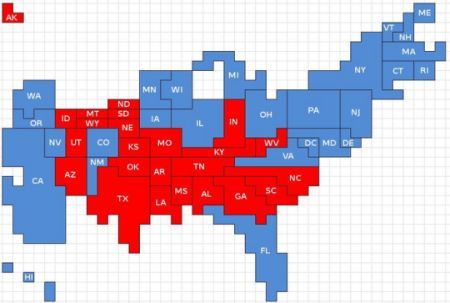 You wouldn’t think it was possible to draw a line between I Dream of Jeannie and Election Day Statistics. You’d be wrong. And who drew that line for me? “Americans Against The Tea Party”.

While I have opinions, my overall theological/political stance is a lot like John Lennon’s was: “I don’t believe in Beatles; I just believe in Me“.

So, yes, I tend more toward Democrat than Republican, and the map you see above makes me happy. But it isn’t because this map makes the red states look vulnerable in a way that the standard land-mass-based version doesn’t; I like this map because it explains something that the standard topographic map hides.

In other words, it changes perception and reality.

In much the same way it can be hard to tell tool from toy, and it’s true that computers change, none of these positions “mean” anything until you apply your personal version of perception and reality. That’s what we do at Answer Guy Central. Our job is to make your business look like what you want it to look like to both your visitors and to Google. One is human marketing, and the other, search marketing. They add up to Influency* .

(And really, what’s more influency* than a good map purporting to “say something”?)

Making your message simple carries a lot of weight. And as much as I despise it, Facebook really can help make messages simple—if you use it the right way. The issue is getting your message to your peers. Millions of Random Strangers are far less valuable.

Even billionaires have trouble with this; Mark Cuban just pointed out that Facebook is making it too hard for him to reach the people in his social network there. And Mark Cuban isn’t just rich, he’s smart, too. And Using Facebook is STILL too hard for him to use effectively. On the other hand, Mark Cuban would get further criticizing Virgin America Customer Service than I did, so . . . we don’t need to feel too sorry for him.