Four more years. Whether you’re happy about that business change or not, four more years of President Barack Obama is now a fact. You’ll adapt, because it’s what makes you a business person.

You also have proof that Search Engine Optimization works. And we have some new traffic to Answer Guy Central. A big thank you to Nate Silver and his Election Day Statistics. 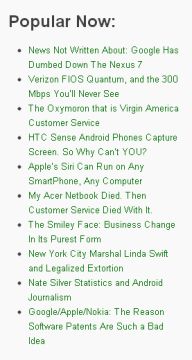 This is our “current” popular traffic. This information is constantly changing, and what shows up here is a reflection of the most popular articles at Answer Guy Central over the previous 15 days. You’ll see that #9 on the list is the article I wrote yesterday about Statistics, Election Day, Nate Silver, and Journalistic Integrity.

The fact that yesterday’s piece is the ninth-most popular article over a fifteen day period during which we published ten sounds unremarkable. In fact, if you see the content we produce at Answer Guy Central as “news”, it’s quite bad. But we aren’t in the news business here; we do marketing. Specifically, the articles I post here are a form of long tail marketing, and are designed to attract traffic over time. Only one other piece out of the ten you see was produced during the fifteen day period being measured.

In other words, an article hitting #9 on the day it was written is not typical at Answer Guy Central. It means we have an unusual amount of traffic to the Election Day/Statistics/Nate Silver piece.

Since timeliness and “being news” aren’t what drive traffic here, this means either that other web sites are sending us traffic because they found the Election Day Statistics piece and linked to it, or that we’ve driven traffic here ourselves using some of the many Search Engine Optimization techniques in our bag of tricks.

Or that within hours of publication Google decided we know a thing or two about Election Day Statistics.

Two out of three of those scenarios are in play. Let’s talk about that last one.

None of that is especially interesting unless you’re a search engine optimization practitioner or someone who’s thinking it’s time to hire one. Being the former and wanting you to consider us if you’re in the latter position, I’m going to tell you more.

Sounds scary, right? Seems like our little blip onto page one for election day statistics was just that, and we’re gone now. And since we don’t practice “right now rankings” on this site we must be doomed to obscurity?

About a month ago, Google tweaked the way search engine rankings work to push news higher—when it’s news. Conversely, anything seen as “news” will start to fall when its newsworthiness drops. So we’ll be back. Nate Silver, Election Day, and Statistics will be linked to Answer Guy Central and long-tail search engine optimization for a very long time.

And we can do that kind of thing for your business. Want to talk more about Search Engine Optimization? Me too.