I Dream of Jeannie, Barbara Eden, and Facebook Non-Privacy 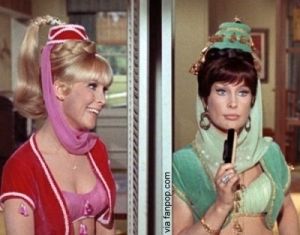 I’m pretty sure Barbara Eden was my first crush.

Take a look at this picture cut from my Facebook feed. One of my friends either “liked” it, commented on it, or shared it. She happens to be pretty active in her use of Facebook, and between that and the fact that thousands of other people did the same thing in the three days since it was posted, it bubbled up.

Now take another look. This innocuous picture of Barbara Eden has turned the now-78-year-old into the perfect Facebook “like button Trojan” . Think about it. It’s a pretty woman, as both a brunette and a blonde, referencing a television program that evokes a simpler time. This picture is SCREAMING for a “like”.

ACoH is open to people of all backgrounds, sexual orientations, and cultures. It is a 21 and over adult forum that is moderated. Certain negative conservative opinions, race, gender or orientation bashing is subject to an immediate ban without warning.

But I do know this: stated innocuous intent of the organization aside, if you “like” Adult Children of Hetereosexuals, you give them permission to market to you, and to tell the world that you liked them.

Let that sink in for a moment.

I’m not suggesting you need to go all “Chicken Little Says The Sky is Falling” over I Dream of Jeannie and the lovely Ms. Eden being co-opted in this way. Privacy is actually a relatively new construct, it’s hard to even define what privacy is, and I’m pretty sure that most of us have come to terms with the fact that the Internet has no undo button. And that even family fun can become a privacy issue.

But unless you agree with Facebook CEO Mark Zuckerberg’s position that everything we do should be public, you’re still trying to keep some of what you do private. Click a like button on anything more than a friend’s picture or a comment, and you’re probably giving away a lot of rights.

I’m serious. The Like Button can land you in court.

I Dream of Jeannie. No, seriously, I have dreamed about Jeannie. But I’m not saying so on Facebook. And if you value your privacy, neither should you.